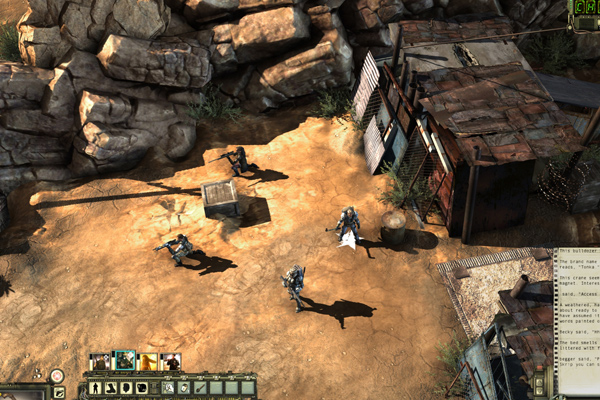 The successful Kickstarter campaign of Wasteland 2 was a momentous occasion for the gaming industry. Though the first Wasteland game may not be familiar to many of you, no doubt its spiritual predecessor, the Fallout franchise, is. With Wasteland 2, developers Inxile got the opportunity to show how their vision of post-apocalyptic RPGs differs from modern incarnations. And, God damn, what a vision it is! Wasteland 2 is the 21st-century embodiment of the dream 1980s and 90s RPG – a bird’s eye RPG with turn-based combat that takes full advantage of the developments of the past 20 years.

Wasteland 2 begins at a funeral. The four characters you begin the game by creating are attempting to become Desert Rangers, a group of lawmakers in the post-apocalyptic Arizona Desert. The funeral is for Ace, one of the best the Rangers had. Your final task for induction into the Rangers is to complete Ace’s final mission. This core mission will send you out across the arid Arizona Desert, meeting a huge cast of unique and interesting characters and completing some of the most conceptually superb quests.

A large part of what makes Wasteland 2 so successful is the interplay between its systems. Dialogue, Combat, Quest structure, Loot, AI – all of these aspects feel like they were given equal love and attention, making them combine into a flawless experience. Too often of late, games have been released which will accomplish one of these components superbly, only to the detriment of every other aspect. In the case of Wasteland 2 there is never an aspect that feels like a chore you must complete to get back to what you really want to be playing.

Dialogue, for example, can often be a component of RPGs where poor quality writing can make you lose interest or engagement with not only the narrative but also the characters and world itself. The writing in Wasteland 2 is an absolute treat, presenting characters, situations and concepts that are a joy to engage with. Every time I entered a new town I clicked with glee, looking for the next NPC that my rag tag group of adventurers could converse with. The excellence of the writing comes from not only its competence in presenting fascinating characters and scenarios, but also in capturing tone. The game understands that it treads a fine line between serious and farcical and embraces this dichotomy to stunning effect.

Combat is another area in which Wasteland 2 excels, presenting turn-based combat that is not only brutal fun but also keenly strategic and intellectual in nature. This comes partly from the progression system. You have to divide your party carefully into skillsets that will give you the greatest chance in battle. For example, I was careful to create a team with diverse combat range – shotgunners for short range, pistols and rifles for medium and a sniper for long range. This allowed me to arrange the battlefield in a way that meant maximum damage with minimum losses. The strategy of the game also comes from the diverse set of enemies. The enemies are varied in their AI, how they react and act in battle, but also in their combat style and form. This makes every battle uniquely different as you balance the different strengths and weaknesses of enemy types. The combat is constantly enhanced and augmented, not only as you progress the skill of your characters, but also as you find and equip increasingly better weapons and gear. The loot system is quite impressive, so much so that every battle feels like it could merit another upgrade for your party.

The one real weakness of Wasteland 2 is in its visuals. Though the game presents a variety of very well designed locations, the graphics themselves are quite lacklustre, especially the closer you zoom. However, despite this flaw, the world building through every other aspect is more than strong enough to outweigh every low-resolution texture you may see.

Wasteland 2 is an absolute feat, combining countless meticulously designed and executed components into an absurdly fun 60+ hours adventure. I never thought that post-apocalyptic Arizona would be somewhere I’d want to spend my time but, as it turns out, I never want to leave.
This article first appeared in Issue 27, 2014.
Posted 11:58pm Sunday 12th October 2014 by Baz Macdonald.