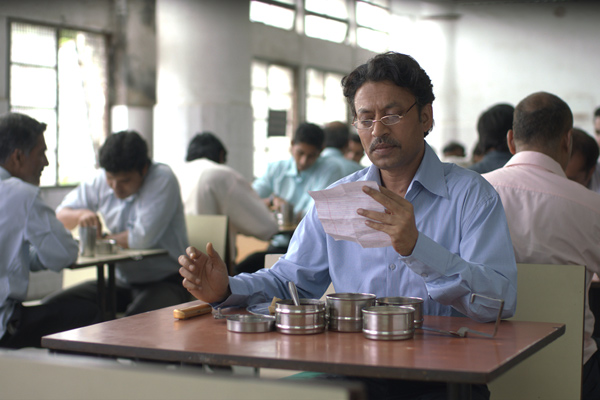 The Lunchbox is set in india and tells the story of Ila, an Indian woman who is struggling to connect with her distant husband. When the lunch she sends to her husband gets delivered to Saajan, a cynical widow, the two begin delivering messages to one another through the lunch delivery service.

As with any romance movie, the plot alone sounds super cheesy. However, director and writer Ritesh Batra’s script avoids romantic stereotypes and instead tells a very real and human story of two damaged people finding refuge and support in the most unlikely of ways. The things they talk about are never sappy, or indeed romantic for that matter, but rather act as a way for these characters to say the things they need to say and have been unable to. It is through this mutual support that romance blossoms, instead of through declarations in the rain.

On the romance genre scale, The Lunchbox is on the sophisticated side. It doesn’t pander to your tender heartstrings as most films in this genre do, but rather uses the notion of companionship as a platform to investigate concepts of human intimacy as well as cultural concepts of romance. That is not to say that you won’t get warm fuzzies, which no doubt you will, but those fuzzies are far more organic than I am used to.

The setting of India offers, too, a rare take, not only posing a welcome change of character and social archetypes from Western movies in the genre, but also offering a unique perspective on the function of love itself within another culture.

Nimrat Kaur, who played Ila, and Irrfan Khan, who played Saajan, gave superbly varied and engaging performances. Kaur’s performance had a strength that was amazing to watch, particularly as she battled the internal battle between her desire to be treated with respect and her supposed cultural duty as a wife and mother. Khan’s performance as Saajan was equally powerful, but showed instead an outwardly strong man trying not to show the world how damaged he is.

The Lunchbox is an amazing romance film that is much food for thought as food for the soul.
This article first appeared in Issue 27, 2014.
Posted 11:58pm Sunday 12th October 2014 by Baz Macdonald.