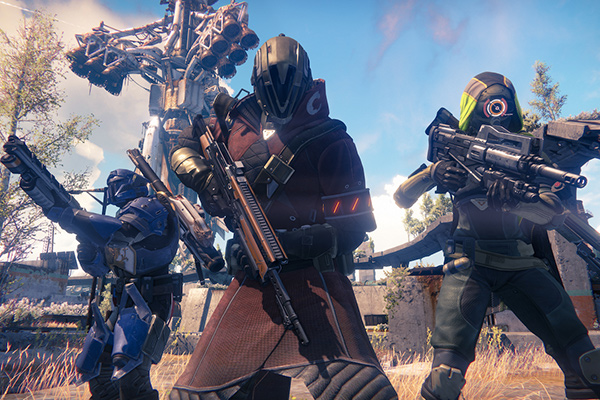 The hype machine was put into high gear before the launch of Destiny. Although Bungie, the celebrated studio behind Halo, met these expectations in many ways, they also fell well short of them in many more.

My biggest disappointment with Destiny has to be in its storytelling. All aspects of the game, from its literal story to bigger concepts such as lore, tone and universe building, are all painfully weak. The base story follows you, a guardian who protects the traveller an alien artefact that brought prosperity and progress to our solar system. However, alien races pursued the traveller and destroyed almost everything that it had allowed us to create. The story follows your guardian as they seek to push back the Darkness, the name for the enemy alien races, and restore the traveller’s Light, the name given to the artefact’s power. You may think that this synopsis is incredibly cliché and you would be right. There is nothing original about the story and it certainly is not the best-executed version of these ideas either. The characters, dialogue and plot are all either utterly forgettable or cringe-worthy in their ineffectualness.

The real issue is that the story is entirely unsupported by the lore, which for some reason Bungie seems to have taken as granted that we would fully comprehend from the beginning. But of course we don’t, and are not likely to considering that the lore is entirely text based and delivered outside of the game through the Bungie website. As you play the game you progress through achievement barriers, such as kill “x” number of enemies in an area, unlocking Grimoire cards, which are pieces of Lore unlocked in your Bungie account and accessed through the Bungie website or app. This creates an alienation between the lore and the game which makes the whole experience feel a little empty, almost like a balloon that is blown up to make it look massive in scale but in reality it has nothing in it but air; no substance whatsoever.

This emptiness is further emphasised by the scale of the game. Its free-roaming nature means that Bungie had to develop one area for each planet in which the missions, as well as the free roaming, take place. The effect of this is that the entire games scale feels lopsided. You are an explorer in a spaceship who could literally explore anywhere in the solar system, and yet the only part of Earth, for example, you can explore is a spaceport in dilapidated Russia. Though it makes sense from a technical standpoint, it feels very claustrophobic.

But the funny thing is, despite my disappointments in these aspects of Destiny, I can’t put the game down. There are a lot of people that argue gameplay will always be the most important aspect of any game, and though I have argued against this perspective in the past, it is hard to deny that though I think the universe of Destiny is almost entirely charmless, the gameplay is undeniably addictive.

The gunplay is without a doubt the lifeblood of this game. Bungie has created combat that is beautifully balanced both in PVP and PVE, creating experiences that are simultaneously challenging while still being empowering. The challenge of PVP is obvious, other players will always be the ultimate challenge in their speed and unpredictability. However, for those who don’t enjoy this kind of frantic mayhem, progression is equally plausible entirely through the PVE. But this doesn’t mean that you are always going to have an easy time of it. Once you reach the level cap of 20, and begin levelling up your gear to reach the higher gear levels, the PVE combat becomes exponentially more difficult. Impressively, this is not only difficulty in that you take more damage and enemies take less, but the enemies become smarter as well. I was impressed (and annoyed) to find that the enemies began strategizing against me, often flanking me and pushing me out of cover.

This excellent gameplay is supported by features and mechanics popularised by MMOs, including versions of dungeons, raids and loot drops. As they do in MMOs these mechanics give players a reason to keep playing as you seek to buy that ridiculously expensive legendary piece of gear, or to finish all of your bounties.

Destiny was ridiculously over-hyped, and your experience with it may well suffer because of it (though the sales of the game won’t). However, if you aren’t looking for an amazing story or a well-crafted universe, but rather just an addictive shooter with some really fun co-operative play and progression systems then Destiny is a game well worth playing.