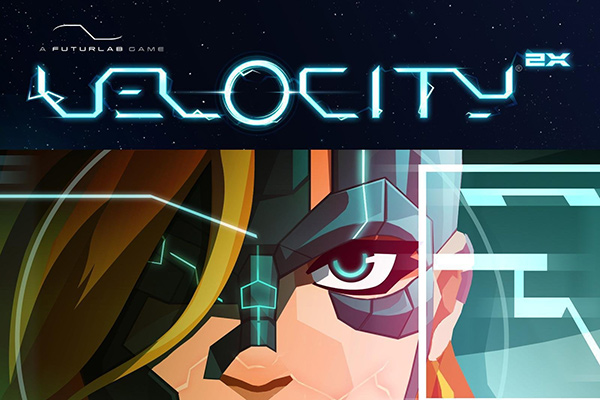 It is exciting to consider the developments that are yet to come to existing genres. Looking at the past two decades of game development you can track the innovations and developments that have evolved genres, making them better and better. However this gradual progress makes it difficult to get blown away by the developments of any one title. However, there is always one sure-fire way to create an exciting new experience without having to create any overwhelmingly innovative new ideas or mechanics. That sure fire solution is by creating games that amalgamate two different genres, just as Futurlabs new game Velocity 2X has done.

Velocity 2X is an amalgamation space shoot ‘em up game and platformer. Though the shoot ‘em up components look conventional at first sight, they feel quite unique to control. This comes partly from the movement design, which is light and quick making controlling the space ship very fluid and manoeuvrable. The unique feel also comes from the additional features that are fed throughout the game. The core of these features is the ability to teleport through walls as you fly. This mechanic drastically changes the way you approach levels by adding an additional layer of strategy to how you fly through the often maze-like layout of levels. This mechanic is supplemented with additional features such as being able to drop checkpoint markers within levels that you can teleport back to at will.

Within the flying levels there are points that require you to dock to proceed. It is at these points that the game becomes a platformer. Though many of the mechanics stay the same, such as shooting and teleporting, the platforming requires that you use them in different ways. This both increases your shooting and teleporting skills while keeping the experience fresh.

The ingeniousness of these features comes partly from how innovative they are, but more so from how they are incorporated into the design of the levels. As the new mechanics are fed into the game the levels change to challenge your understanding and ability with those new mechanics. These designs combine in later levels creating challenges that require you to apply quick thought to what ability is needed.

The game itself is broken down into 50 distinct levels. Each of these levels has an emphasis on one of three play types: Hostile Forces; Critical Urgency; and Search and Rescue. Each level you play is judged on speed and how thoroughly you collect items and destroy enemies. Each of these level types places emphasis on one of these criteria. For example, Critical Urgency has an emphasis on how quickly you get through the level and has a level design that challenges your ability to move through it quickly. Whereas Hostile Forces emphasises combat and as such the challenge comes from the frequency and difficulty of enemies.

These three level types are skilfully tied into the narrative, which follows human soldier Lt. Kai Tana as she tries to escape alien space. The level types match the current situation of the narrative, which is progressed through a cut-scene at the start of each level. Though not comprehensive, the story is skilfully executed, communicating both an exciting narrative with some impressive character development considering the short and snappy cut-scenes through which they are presented.

This narrative loosely continues the story of the first Velocity. However, the first Velocity game was borne not out of the concept, but out of a piece of electronic music created by developer James Marsden. It is clear playing Velocity 2X that the inspiration for this sequel came from its soundtrack too. The frenetic electronic soundtrack contributes to both the background and the foreground of the game. In the background the fast paced and infectious beats drive the urgency of the game that keeps it exciting and fast-paced, while in the foreground you can consciously match the rhythm of the music to your movements. Dodging around obstacles, firing bombs and lasers and timing your teleports can all be synced to the music, making the experience both intuitive and deeply satisfying.

Velocity 2X is an exciting game to play, combining tense and quick gameplay with a superb soundtrack. On top of this, the amalgamation of genres as well as the steady stream of additional gameplay mechanics makes Velocity 2X a game that is hard to put down and impossible to not come back to.
This article first appeared in Issue 23, 2014.
Posted 4:38pm Sunday 14th September 2014 by Baz Macdonald.