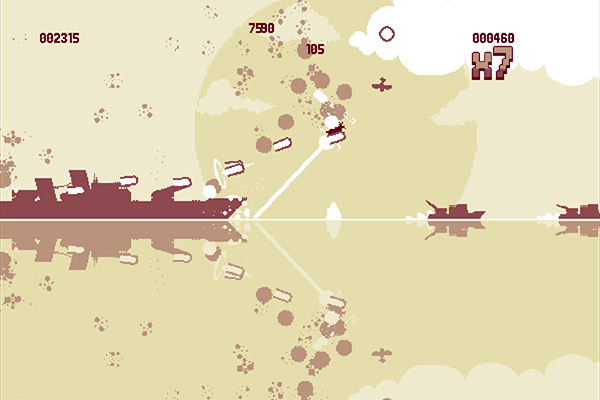 This may or may not be something you consider when pondering video games, but join me for a moment in thinking about how a game feels to play. Think of your favourite game … Now instead of its art, sound or gameplay mechanics, I want you to think about how the game feels. Does it feel light or heavy? Floaty or grounded? Smooth or stuttered? These can be vague concepts, but I’m sure with some thought or a conscious examination when playing you will be able to determine the weight and feel of any game. Take for example a Call of Duty game; they are famous for being incredibly fast, smooth and grounded first person shooters. Now compare that with another first person shooter such as Arma that is realistic in how heavy, slow and stuttered it feels. When you think about these differences in feel they seem obvious, but there is a reason you need to think about it, because the feel of a game is supposed to be a sub-conscious experience. That is why a game such as Luftrausers feels so unique to play, because it very clearly asks you to consider the feel of the game and how that affects your experience with it.

Luftrausers is a 2D airplane shoot ‘em’ up title developed by the talented indie team Vlambeer, who you might also know as the developers of Ridiculous Fishing. Expressed through the tone and aesthetic aptly associated with the WWII era German military, Luftrausers has players commanding an airplane against hordes of enemy planes, boats and blimps. The plane you command varies greatly depending on which combination of weapons, hull and engine you pick. As well as changing the way you fly and engage in combat, your choice of these three specifications also changes the challenge you are presented. These challenges vary from achieving a certain score, to destroying a certain number of enemies or with a particular method.

In itself these challenges are fun and varied enough to engage players in hours of aerial mayhem. However, it is the combination of the challenges with the airplane specifications that really makes this gameplay special. You see, each different component you choose (weapon, hull and engine) drastically changes the way the plane feels to fly and shoot with and then combining these different components creates a staggering selection of varied fighting and flying styles. This innovation is what makes the feel of the game such a keen focus. Your first several hours with the game will be naturally be inclined to experimenting with these different components and how they change your experience with flying. You find yourself being drawn to a certain combination. For example, I preferred using weapons that were slow and precise but delivered huge amounts of damage, but then combining these slow weapons with fast and agile engines and hull. However, though you may find a preferred play style, the game pushes you to constantly have to change your aptitude with different play styles, as the challenges are tied to the components. This means that your experience with the game is constantly changing, you have to repeatedly retrain yourself to operate and fight with drastically different feeling airplanes.

The game has no story, but instead opts for challenge as the hook for continued play. The clever design means that the challenge the game offers is constant and evolving, allowing you the feeling of becoming more proficient while still having you continue to chase the carrot at the end of the stick. When I began my time with Luftrausers the unique controls and flying functionality were alien and confusing. However, with only a little practice I quickly found myself not only comfortable with the controlling, but excited by how the game allows you to become quickly proficient with its mechanics. This adds another layer of fun in just racking up high scores and the feeling that you are constantly one more attempt away from gaining a new and impressive high score.

Luftrausers is a game unique in tone, aesthetic and, as I have demonstrated, in how it feels to play. It is so satisfying in this uber-realistic digital landscape to realise how much joy only a few pixels properly designed and executed can offer.
This article first appeared in Issue 21, 2014.
Posted 5:55pm Sunday 31st August 2014 by Baz Macdonald.