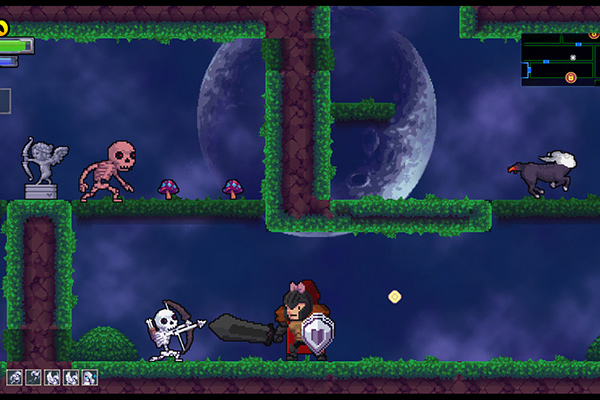 We are currently living in the midst of the Renaissance period for the platforming genre. Over the past couple of years Indie developers have created a litany of amazing new platforming experiences, which is incredible when you consider that at its core platforming games really only consist of jumping from platform to platform. Nevertheless, we have been treated to some amazing titles, including: Spelunky; 1001 Spikes; and now what has become, potentially, my favourite platformer of all time, Rogue Legacy.

So what is it that we have to thank for this period of amazing platformers? The rediscovery and influence of the “roguelike,” of course – a subgenre of game descended from 1980’s Rogue whose most basic mechanic is that the death of a character means restarting the game, or at least starting from the beginning again. Like in the Platforming Renaissance, contemporary game developers have been looking to this tradition with great success. Playing platformers of the 80s and 90s is an experience coloured by both the frustration of failing, and having to start again, a game, and the glee of completing it, which was made all the sweeter by the attrition it took. Developers such as Cellar Door Games, responsible for Rogue Legacy, are emulating this experience while using modern technology and techniques to enhance it in ways previously unthought-of.

The premise of Rogue Legacy is an age old one. There is an ultimate evil in a castle, and it is the sworn duty of one family to vanquish this evil. However, Rogue Legacy stretches this premise to it’s limit, by creating a roguelike in which each time you die you must choose an heir to continue your valiant quest, but setting no limits on the number of heirs you can use to accomplish this. In my first playthrough it took me a hilarious 226 generations to complete the entire castle. Of course it is possible to use significantly less (one of the game’s trophies challenges players to do it in less than 12), but I was having too much fun just exploring the castle and slaying bad guys, feeling myself become increasingly more formidable and skilled with each generation.

The castle itself is broken up into four sections, each with a distinct aesthetic and monster set. It takes time to become familiar to the strategies and traps of each area, meaning that it will take a significant number of generations before you are familiar enough to finish a whole area and kill its boss. For those thinking that playing the same map over and over again sounds boring, you’re in luck. The map is randomly generated in each play-through, meaning that every new hero’s quest is unique. Of course, it is possible to pay a portion of your loot to fix the structure of the castle. But I couldn’t find the fun in that, and preferred instead to plunder and pillage with a fresh castle each time.

Much like the castle, each heir you choose feels unique also. This is due to a hilarious and clever system of traits. Each time you die you get a choice of three heirs to carry on your quest. These heroic men and woman each have their own distinct name (which lapse after a period into Sir and Lady whomever the II, III, IV etc.) and also a distinct build including a class, ability and a set of traits. The class dictates what kind of fighter you are and, similarly, the ability supplementing this, such as magic spells and offensive and defensive skills. However, the traits are much more character orientated. For example, a trait might be that you’re colour blind, which would make your next run of the castle in black and white. Some have gameplay effects, such as this, while others just flesh out your characters personality or appearance such as the fact that they are bald, or nostalgic, or even gay.

The goal of each run, especially early on, is more about collecting gold than beating the game, as you can use this gold to unlock skills, buffs and vendors to enhance and supplement your character and experience, making the game progressively more feasible. This mechanic also builds your castle with each upgrade, which makes you feel like you are building your family at the same time as destroying the evil nearby.

This clever, amusing and progressive game is an absolute joy to play. It is the kind of game that you hope never ends, and thankfully due to it’s roguelike structure it never needs to completely. Also the levelling system is so robust that you can continue to build your character and home long after the evil has been vanquished.
This article first appeared in Issue 20, 2014.
Posted 12:53am Monday 18th August 2014 by Baz Macdonald.