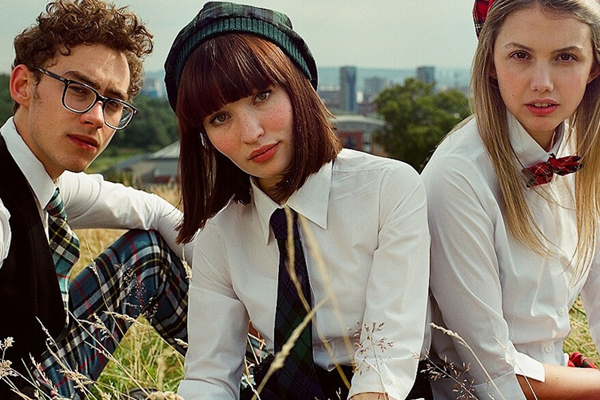 God Help the Girl follows three youngsters around the streets and music halls of Glasgow, in one of those “perfect carefree summer” kind of romps. Eve is recovering from a self-harm episode and decides to chase her musical dreams, enlisting the help of mega-cutie James, one of those insufferable music snobs who believe they know best about what makes art pure. Together with their sheltered friend Cassie, they dance, skip, and sing their way through the film, forming a band, forming relationships, and writing music that expresses their desires and frustrations to us. The film has a Tom Sawyer- type of tra-la-la to it, and we as the viewer have perhaps a little more perspective on what issues, such as denial and self-loathing, are really in play here, than the characters themselves.

To say this is a vanity project might be understating it. Writer/director Stuart Murdoch crowd-funded this film musical on the basis of the songs his band had already written for the characters. Thus the script is clearly constructed around the music, and at times feels clunky and self-conscious. There is a slight sense that the dialogue is only here to fill in space between dance numbers, and frankly, until it dawned on me that the point of the story was that the characters were in their own Neverland, I was very confused about what was going on (nothing?). Only a mere 88 minutes into the running time, the film finally began to explore something meatier, and the characters began to have the unpleasant, necessary conversations that would mark the beginning of the end. She loves me; she loves me not. The record company will sign our band; they will sign us not. We will stay here, happy forever; we will grow up.

This film beautifully captures when “just for a moment, we were all in the right place, and the possibilities were infinite.” For this reason, and to see two endearingly dorky kids figure out their first and last kisses, I highly recommend it.