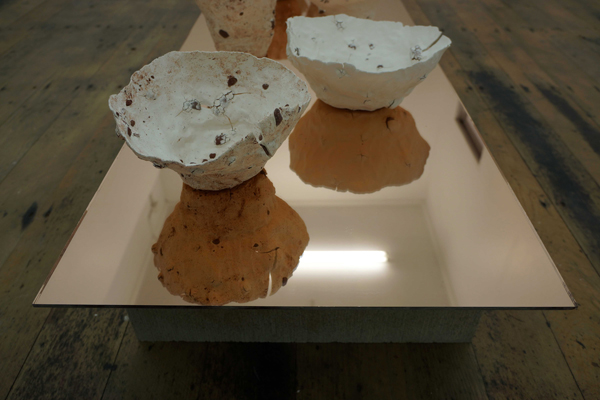 The Optimists is a new work by Christchurch-based artist Sophie Bannan and Auckland-based artist John Ward Knox, and is currently being exhibited at The Blue Oyster Art Project Space. While each artist presents a series of work unique to their current practice, The Optimists offers a parallel moment between the two artists. It is a space for the two to collaborate without any preconceived themes or constructed ideologies.

Originally from Melbourne, Sophie Bannan is currently completing an MFA in Christchurch. Sophie also writes semi-fiction, cultural criticism and exhibition reviews and has recently written for Point Magazine and The Physics Room. She founded artist-run initiative Strines (Melbourne) and co-founded Personal Best Gallery (Auckland). Recent solo exhibitions include Variations, Knight Street Art Space (2013) and I am in the middle, Rearview (2013). In early 2015, she will be attending the Mountain School of Arts in Los Angeles.

John Ward Knox holds an MFA from the University of Auckland (2008) and was a founding member of Newcall Gallery (Auckland). Recent solo exhibitions include Breathing After Thinking, Ivan Anthony (2014) and a lightening strike, a hand on a shoulder, Robert Heald (2013). He has been part of the group exhibitions New Revised Edition, City Gallery Wellington (2013) and Contact. Artists from Aotearoa/New Zealand, Frankfurter Kunstverein (2012) and in 2008 he won the National Drawing Award.

Both artists are interested in similar practices regarding form, space and material and this exhibition reveals how each artist is able to effectively render form, through various manipulations of material, to generate different responses to the objects. Moreover, the artists bring attention to the fluid concept of space, emphasising how it can alter one’s perception of any object.

When you first enter the gallery there is a low table with a delicate wee sculpture assembled lonesome on the top of the reflective table – notably reflective as the pots are actually white, but the copper toned surface makes their reflection look like raw terracotta; it’s so organic. The object literally looks like a handle-less teacup/upside down mini volcano made out of asteroid remains, solidified cookies and cream, and those weird paper-thin shells you find on North Island beaches that have black speckles on the surface.

Regarding space, my initial thoughts were “it is really weird how such a small object can impose feelings that are totally unrelated to the object itself.” I genuinely felt sorry for it because it looked so significantly insignificant.

After a moment of contemplative pity, I moved on to the next room, where nine of the small pot/teacup-with-no-handle objects are similarly assembled (but in a zig-zag kind of arrangement) on another table that has an identical surface to the one mentioned before. I really appreciate the material coherency here and the tables stood out to me more than the actual objects.

The objects are in a smaller space and there are more of them, so naturally the general feeling was a lot less lonely and a lot more intimate. I stayed in there for about five minutes observing. Again, I was more interested in the reflections than the actual objects, and in this instance of thought, I couldn’t help but consider some qualms of contemporary culture – does the image, or the object generate more meaning and value? And why? And how does the space it’s represented in contribute to that? (Art being art, I was told there is no certain answer to my questions).

In this exhibition each artist has an interest in material and spatiality; and each of their work revises, evaluates and compiles new materials and spaces. In The Optimists, each object is reworked in a slightly different way, and is presented in different spaces, fuelling numerous feelings around what fundamentally (materially) appear to be the same objects. This suggests how each object questions and challenges ideas about how a material can express itself in a most basic way, while simultaneously hosting an external realisation.

The exhibition encourages the viewer to see “things” as objects, whose surface is a mere indicator of a far deeper volume beneath, and I’m probably going to drag all my friends there (I say drag because I’m sure they get sick of me taking them to galleries all the time) and try to make them understand life a little bit more, one exhibition after the other! You should do it too. It’s on display until 23 August.
This article first appeared in Issue 19, 2014.
Posted 9:16pm Sunday 10th August 2014 by Hannah Collier.