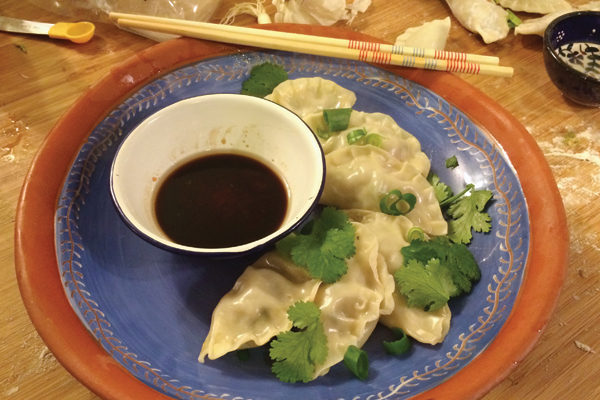 Hi, my name is Sophie and i am a dumpling fiend. Steamed dumplings, fried dumplings – all the dumplings! I spend a lot of time sourcing out the best dumpling stalls and night markets and frequently venture into D-graded food establishments to find premium offerings.

I had tried making dumplings before but my Caucasian man-like hands made the delicate motion of wrapper crimping somewhat a futile art for me. I think my father took pity on me when he presented me with my very own dumpling press (that or he wanted me to make him dumplings).

I threw in the Burger Sunday towel and directed my patience towards dumpling production! Mince and cabbage – that is pretty much all you need to make dumplings. Well, that and wrappers. Pork and coriander was my flavour of choice.

You can buy the wrappers at your local Asian supermarket for less than four dollars for a pack of 50. Making 50 dumplings is a horrendously tedious activity, even with your own dumpling press, so make sure you have plenty of time onhand. And hands. You can fry and steam or just fully steam your dumplings, up to you. Increase the greenery in your diet by serving these up with a side of steamed bok choy or whatever.