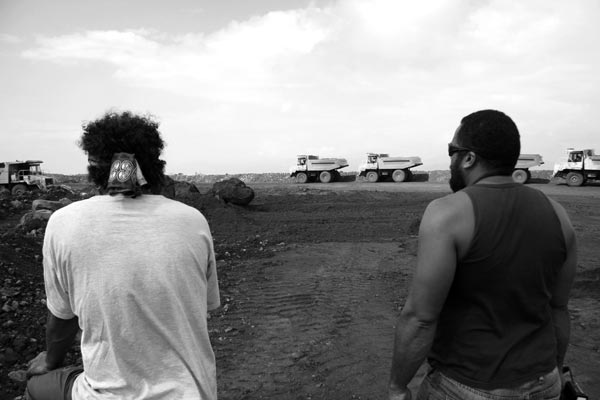 New Caledonia is one of the world’s richest sources of the metal nickel, making it a target for mining companies. In the early ‘70s the Ballande mining group procured much of the New Caledonian indigenous land to begin mining the precious metal. In 2008, mismanagement of mining sites and heavy rain caused a large landslide that dumped hundreds of tons of toxic sludge into the fishing waters of the local Kanak tribe. Jim Marbrook’s documentary Cap Bocage follows the Kanak tribe’s fight to have the Ballande group clean up the spill.

That description was a tad dry, right? That was just to give you a taste of what Cap Bocage has to offer, because although the source material is interesting, this film is often overwhelmingly informative rather than entertaining. However, for those prepared for something as dry as a Weetbix, there are a lot of fascinating stories and thematic concepts to analyse.

The film naturally delivers many perspectives on concepts such as colonisation and capitalism, as the movie develops into the fight of the indigenous people versus the capitalist giants. The incident itself explores concepts of environmentalism, and investigates the idea of environmental responsibility, as Ballande attempts to argue that Mother Nature will remedy their mistakes.

The film primarily follows Florent Eurisouké, the president of the Kanak’s environmental society. Florent is an impressively passionate man, who often appears as David did before Goliath. There were many moments that I thought this film was worth watching just for the fascinating character study that is following this man.

Cap Bocage is a heavy documentary that often feels more like a chronicle of the events than an investigation of them; however, interesting characters, locations and thematic concepts still make this a movie worth highlighting in your International Film Festival Guide.