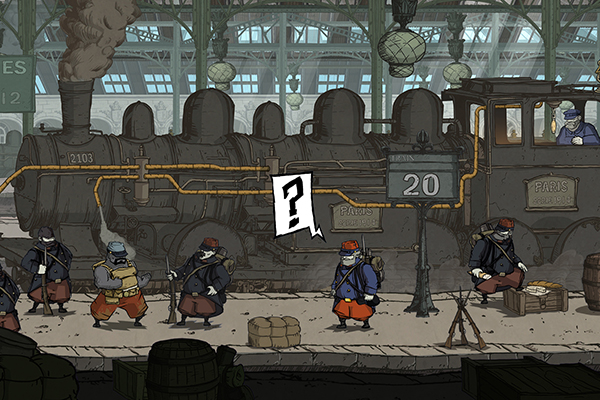 This year marks the 100-year anniversary of WWI, making it a crucial moment in our generation’s cultural memory. With the last veteran of the Great War having passed away in 2012, our memorials of this event become increasingly about remembrance instead of respect. As time moves on, it will be easier for us to distance ourselves from the events of WWI and harder for us to understand or empathise with the people and events of this bloody period. This is why now more than ever it becomes the responsibility of artists to create evocative content that keeps the memory of these people and their experiences fresh in our minds. This was clearly the intention of Ubisoft Montpellier in creating Valiant Hearts: The Great War. They should be applauded for the initiative, but more so for how skilfully they managed to combine history and human experience into a thought provoking and emotionally evocative experience.

Valiant Hearts is an adventure game set during WWI and follows a series of character experiences throughout the war. The primary characters are: Emile, a French countryman called into service by his country; Freddie, an American who joins the French army to seek revenge against the Germans; and Anna, a French nurse who seeks to save her father. Though the story revolves around real events and letters from WWI, these characters’ stories are all fiction. However, in doing so, Ubisoft Montpellier managed to create a much larger picture of the war as these characters move throughout some of the most interesting areas and events of the war. It also allowed for the developers to create a story that interweaves and pays off in that satisfying way that only a narrative can, and real life rarely does, while also providing insight into the real stories, experiences and suffering of the people surrounding the characters.

A fascinating consequence of this game being made in the wake of this shift in how we memorialise WWI, is that it allowed the developers some freedom with how they portrayed the tone of their game. What I mean by this is that when content is made that is paying respect to the veterans, then you need to be as loyal to the tone and aesthetic as possible. However, when you are making content that is about remembrance, the focus becomes more about engaging your contemporary audience than it does about recreating events. This is what allowed Ubisoft Montpellier to create this stunning tale using the aesthetic and tone that they did, expressed through the gorgeous art style and narrative style. The art style is stunning to behold at every moment of the game, using a vivid cartoon style to represent the different areas of war torn France. The narrative style is that the characters never speak, but rather physically portray their emotions and relationships, while a narrator divulges the specific information about the war. These factors combine to create a wholly unique experience that is incredibly engrossing and not at all alienating to those who don’t like realistic depictions of war. Valiant Hearts pays respect to the suffering of the soldiers, while not glorifying the violence, as many modern depictions of war tend to do.

Instead of glorifying violence, the game seeks to educate players on the realities of combat. This is introduced not only through the narrative, which often deals with the suffering caused by war, but also through fascinating and informative facts that are introduced at key moments in the game. Reading these facts is optional, but I couldn’t help but read them. Before I played this game, I thought I knew all about WWI, but turns out I had barely scratched the surface.

Though the story is the key focus of the experience, it is grounded within classic adventure gameplay. As you progress throughout the side scrolling landscape you encounter puzzles and problems that you need to solve to progress. Like most adventure games, these typically require you to find certain objects in the environment and move them to the puzzle. Thankfully, Ubisoft Montpellier avoided the classic mistake of creating challenge through how difficult these objects are to find. The objects are always in clear sight, the challenge comes from solving problems that obstruct your ability to collect them. Truthfully, this is one of the easiest adventure games that I have ever played. The puzzles, though often quite cleverly designed, are never particularly difficult. However, I think that this is a very clever design choice, as the puzzles certainly keep the game engaging and interesting, while not impeding the pace or getting in the way of the game’s priority, which is to tell the story of events and characters of WWI.