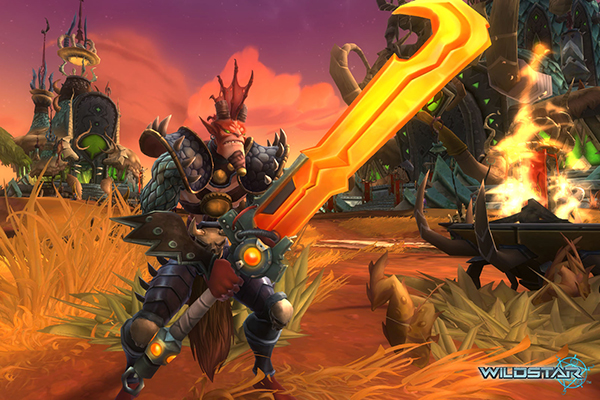 Here’s the little spoken truth about MMORPGs: they’re actually in many ways mediocre games. Take any aspect from a non-MMO game, gameplay, graphics, design, story, and compare it to any MMO and it becomes quickly apparent that nearly every aspect is just a watered down version of a dedicated single player or multiplayer experience. So why then, you may ask, do millions of people dedicate their lives to MMORPGs if they aren’t as good as other genres? For many that answer is more abstract than is typical, in that the real draw of MMORPG comes from the world itself. From how the art, characters, avatars and players combine to make an MMORPG more than just a digital space, but a community, a sanctuary, a magical world in which you get to exist, interact and live as something or someone greater than yourself. I have played in many of these worlds, but never have I felt as at home as in Carbine Studios’ Wildstar.

A large aspect of how successful the world of an MMORPG is comes down to tone, in that it changes how it feels to interact with the world. The true strength of Wildstar comes from every aspect of the game, from the dialogue, to the character and monster design, to the aesthetic and layout of the world that is as pleasant and comforting as a warm bath. From the moment my character appeared on screen, I felt an affinity to the world I was exploring as though I really was part of it and always had been. This sensation is owed partly to the approach of the narrative, which understands that players of MMOs rarely invest in the story, but invest in the tone of the game instead. Wildstar takes nothing seriously, including itself. Every aspect of the world is over the top and goofy, making participating in it relaxed and fun, but still grounded within an over arching narrative concept which gives you a place within the world. Wildstar takes place on the planet Nexus, which was once ruled by a hyper-intelligent alien race, the Eldan. However, they disappeared an eternity ago, leaving the hospitable planet free to be colonised. You play as one of two factions comprised of four races each. The Dominion is a faction forged by the Eldan, with the goal of galactic domination, the Exiles are four races driven from their planets by the Dominion and allied with the goal of destroying them. Whichever faction you choose, your ultimate goal is to claim the planet Nexus for your people.

This quest will see you exploring the planet, completing quests and developing your character as you progress. Many of these mechanics are fairly standard fare, often being clones of mechanics seen in many MMORPGs, such as fetch and grind quests and a standard levelling system. However, I would argue, that this is a pragmatic decision on Carbine’s part. Many times over the last couple of years developers have tried to develop new mechanics for MMORPGs and players have done nothing but complain. So, gamers: you have spoken, these are the mechanics we are going to get from now on. This isn’t a bad thing, of course; many of these components are evolutions of how we have seen them in the past. For example, the game introduces a new sub-set of quests based on how you like to play. At the start of the game you choose a class that has a focus on areas such as combat or exploration. This decision opens up your own set of quests throughout Nexus that offer you opportunities to enjoy that play style.

In a similar vein, the combat of Wildstar is derivative while still being innovative. Like most MMOs, the combat consists of queuing up timed actions. However, while actions have set durations, players can still move around while casting, requiring you to aim your attack within a certain radius of your enemy. This twist has instantly made an age-old mechanic instantly dynamic, by adding a level of strategy to both aiming your attacks and dodging your enemies at the same time. The skills that you use are plentiful; due to the fact that players can custom build skill sets from several different skill trees. This means that not only will your character look distinct from others, but it will play distinctively also.

It is hard to explain to people what is special about MMORPGs. Perhaps they are something that has to be experienced to be understood. Wildstar is certainly worth the effort.