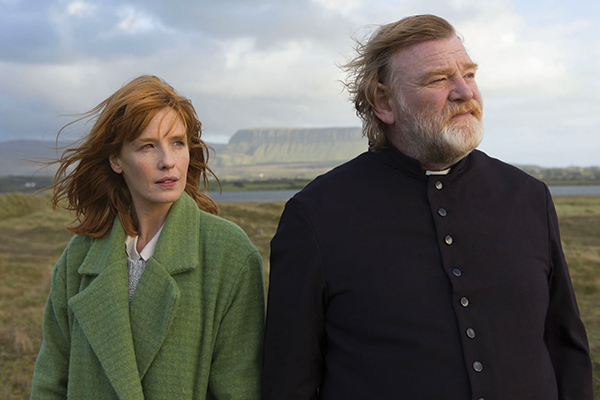 Sometimes it can be hard to pick the genre of a movie before seeing it. You can be easily misled by the marketing or, as in this case, a cast comprising several prominent comedic actors such as Brendon Gleeson, Chris O’Dowd and Dylan Moran. The predominantly elderly audience and I all clearly expected a comedy. What we got instead was an overwhelmingly dark drama and, might I say, a damn good film!

Calvary tells the story of a Catholic priest, Father James (Brendan Gleeson), in a small Irish village. It begins in a confession booth, where a parishioner divulges that a priest raped him as a boy. He explains that because the rapist has died he intends to get his revenge by killing Father James instead, in seven days. The film tells the story of the week after this event, and, for the most part, Father James ignores the event and carries on with his life. What we get is a snapshot of the life of a modern-day Catholic priest, and how he deals with the reality of our modern world, being confronted with adultery, violence, suicide and homosexuality.

Impressively, the script never takes sides. The Catholic Church and priests are certainly not presented as enlightened or particularly good, and likewise the people of the village, despite being often vulgar and unlikable, aren’t presented in a particularly judgmental light either. Rather, the collision of these two worlds, aside from creating an engaging story, act as a platform from which to consider the place of religion in an increasingly secular world. This is made even more poignant by the focus on Ireland and the Irish people, considering that they spent centuries fighting and dying for the right to be Catholic.

Despite the great script, many of the performances were uneven. This cannot be said for Gleeson, however, who gave perhaps the most evocative and powerful performance of his career this far.

Going in, it is important to know that Calvary is a heavy movie. But considering the power of the story and the poignancy of the themes, it’s definitely a weight you should consider shouldering.
This article first appeared in Issue 16, 2014.
Posted 5:12pm Sunday 20th July 2014 by Baz Macdonald.