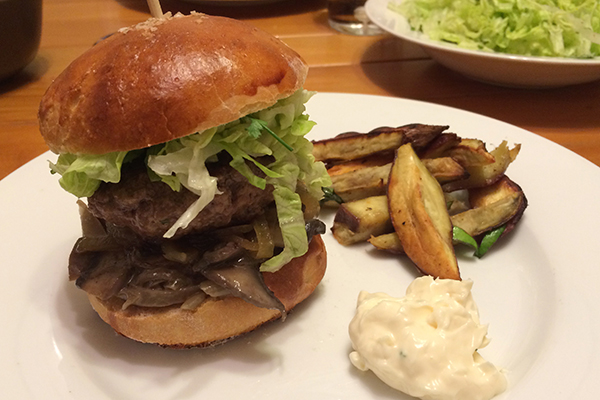 Last week a boy who fancied me bought me a cookbook. Not just any cookbook, but the ultimate in burger-making glory cookbook. If the book wasn’t so spectacular I would have taken offence at this blatant attempt to get me to make him the ultimate sandwich. Riding on the current hipster food trend of gourmet burgers wrapped in patterned greaseproof paper I decided to try my hand at making one of these beauties.

What I love about these patties is that they have only two ingredients: beef mince and salt. Without the onion and all the rest of the faffing around, these burgers taste true and meaty and the risk of them falling apart is minimal.

For the first time since I made baby sliders I made my own burger buns. If you’ve got the time one weekend I would definitely invest the time to make these. Not only are they delicious, but their glossy finish is 100 per cent Instagrammable.

This is probably going to be the first of many a column about burgers, so watch this space. Serve these up with a good side of homemade kumara chips and a dollop of mayo and you’ll be laughing your way past our favourite burger-making pals on George Street.