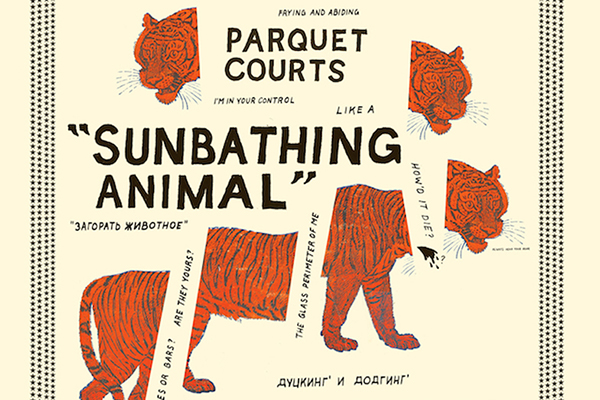 Captivated by the wild blur that is Parquet Courts’ second album Light Up Gold, an initial listen of Sunbathing Animal may throw you off guard. While the album’s opening song, “Bodies,” in tone and yelping vocal style, hints at their previous album, preceding songs show definite stylistic shifts. “She’s Rollin’,” for example, descends into chaotic harmonica and “Instant Disassembly” falls into seven minutes of slow, heart-broken delusion. But what further listens reveal is exciting growth. Sunbathing Animal is serious, it’s smart and it endlessly provides.

Formed in 2010, Parquet Courts consists of Andrew Savage (vocals, guitar), Austin Brown (vocals, guitar), Sean Yeaton (bass), and Max Savage (drums). The Brooklyn band’s first album, American Specialities, was released in 2011 on a limited cassette run. But it was Light Up Gold, released the following year in 2012, that really got things moving for the band. Recorded over several sessions in 2013 and released this year, Sunbathing Animal is the product of considered and gradual songwriting and producing.

My first exposure to Parquet Courts was at Laneway earlier this year. My friend had spent the morning briefing me on them - his enthusiasm was infectious and proved completely valid. Parquet Courts were serious, fast and performed with a cool confidence that grips your attention. The band, barely pausing between each song, created an intense and seamless experience that left me breathless. After, I wanted to know everything about them. While this energy and presence can never be fully emulated when listening through headphones, Parquet Courts’ albums come close to recreating the energy felt when experiencing them live - Sunbathing Animal is no exception.

The album’s excellent structure and lyrics give it a powerful glow for any sunbathing animal to bask in. The structure, both within songs and for the album as a whole, deliberately plays with tempos and tone, which serves to clearly distinguish each song from the other (an aspect of the new album that separates it from Light Up Gold). The opening tempo collapses on itself in “Dear Ramona.” Midway through, things are suddenly shaken up again by the urgency of “Sunbathing Animal.”

These thoughtful plays with structure also create an interesting musical narrative within each song - reinforcing the roaming, wandering feel of the lyrics - which are arguably the most crucial part of Sunbathing Animal.

These lyrics can be anything from anecdotal - to politically and socially critical - to flat-out bizarre. “When we started out to make this record, the focus was – more than ever – on the lyrics,” Austin Brown stated in an interview for The Skinny. “They came first in the process and are meant to be right at the front, so that you’re forced to listen to them. I mean, I don’t know if there’s a hook or chorus on the whole record; but that forces the audience to create their own, depending on which lyric pops out to them – so in its own way it becomes the chorus.”

The lyrics in Sunbathing Animal, which were largely written while the band was on tour for Light Up Gold, contain the prevailing themes of freedom of creativity and the countering captivity of difficult creative process and of the industrial models that exist to share the results of this process with the world. In “Ducking and Dodging,” for example, Andrew Savage sings “I cannot be free, the concert stage, the velvet cage, the glass perimeter of me / all my friends are disappearing / all my letters are in codes.”

Not to be mistaken as slacker rock interlaced with nostalgia for growing up in the ‘90s, Sunbathing Animal is a crucial cuttingly-smart punk record. It doesn’t slip, it doesn’t slop, but it certainly slaps.
This article first appeared in Issue 15, 2014.
Posted 6:52pm Sunday 13th July 2014 by Loulou Callister-Baker.