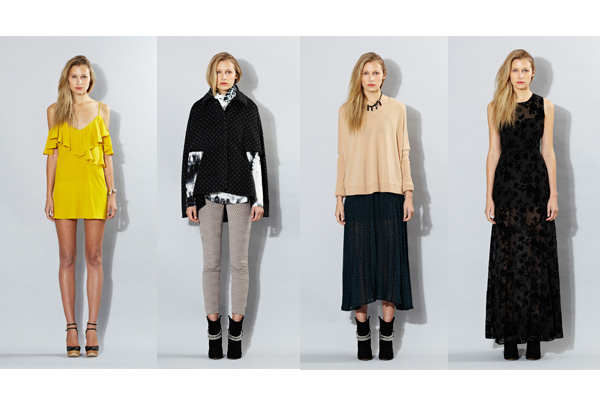 RUBY’s Autumn/Winter 2014 collection, “The Dreamers,” was inspired by the cult classic films of director Sofia Coppola and the rebellious youths of the 1968 student riots in Paris. Having taken over RUBY in 2008, designer Deanna Didovich has seen the label grace its first catwalk at New Zealand Fashion Week and find its feet with a footwear line. This week the Observer caught up with Deanna to find out what the journey has been like and what we can expect from RUBY in the future.

“The Dreamers” was inspired by the films of director Sofia Coppola. What elements of these films inspired you?
I love the way her films transport you onto the screen. They are not overtly over the top, but just really beautiful works of art.

Dunedin is the southernmost RUBY store. Which pieces from “The Dreamers” would you recommend for a typical sub-zero winter’s day on campus?
Definitely our coats and knitwear, of course. We have a dreamy cashmere blend jumper that is perfect layered with one of our coats. We also have some fun, chunky scarves and beanies that are an essential to get you through the cooler months.

RUBY was born in 2002 and you took over as designer in 2008. Talk us through your journey to becoming the designer of New Zealand’s most youthful and adventurous labels. Have there been any highlights?
The time has gone so quickly that looking back over the past few years sometimes amazes me how much we have built and grown the brand! A highlight for me would definitely be the first show we held in 2010 at New Zealand Fashion Week, as well as being named designer of the year by Metro Magazine.

Otago Polytechnic offers an acclaimed Bachelor of Design (Fashion) course with strong connections to iD Fashion Dunedin. What advice can you give to aspiring designers wishing to forge a successful career in the industry?
Get as much work experience as you can, and take it seriously, as work experience can sometimes turn into a full time job!

How would you describe the RUBY girl?
Cheeky and charming, with effortless confidence and a sense of fun.

What pieces from past RUBY collections do you still love to wear?
My Benvolio Cardigan in black and white. Perfect for the cold Dunedin climate!

Since opening its flagship store in Auckland’s High Street, the RUBY empire has expanded to seven self-titled boutiques throughout NZ. What can we expect from the label in the future?
A lot more exciting projects both nationally and internationally! Stay tuned.
This article first appeared in Issue 13, 2014.
Posted 2:07pm Sunday 25th May 2014 by Emma & Liam.