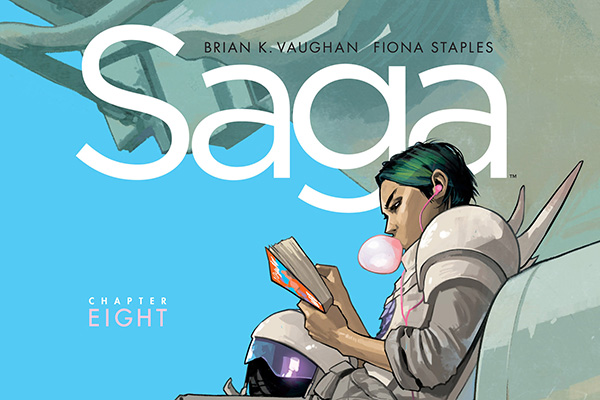 Saga is the new comic book series from Brian Vaughan, who wrote Y: The Last Man, Ex Machina, and Runaways. He was part of the scriptwriting team for Lost, seasons three through five, and he’s currently show-runner for Under the Dome, a TV series based around the 2009 Steven King novel. I’ve not read much of Vaughan’s stuff before, so when I was first introduced to Saga, I was expecting the sort of pubescent power fantasy that I’ve come to associate with those quirky sci-fi/fantasy crossovers. Turns out I’m entirely wrong. Vaughan is a remarkably mature writer, and although the first volume is not entirely free of the male gaze, there are a couple of moments that just blow you out of the water. At one point, a male character goes to “Sextillion,” which is basically just a massive space station brothel. He wanders around, people are boning, and I’m resigning myself to the upcoming gratuitous sex scene. Suddenly, a pimp appears! Oh, great, here we go.

“You decent in there, Slave Girl?”
“Anything but, master.”
“I taught her to say that. Anyway, have fun …”

I roll my eyes and turn the page, and there’s a six-year-old girl, looking scared and awkward. What the fucking fuck. So Saga unexpectedly dropped child prostitution on me, and after that I started taking it a bit more seriously. One of the best things about this volume is the way that things have consequences. Normally when you’ve got empowerment fantasy, you don’t want unpleasant realities messing up your plot – consider, for example, the inexhaustible supply of goons in every superhero story ever. So far, Saga’s going to admirable lengths in its mission to bring real consequences (emotional and physical) to bear on the characters. The real test now for Vaughan will be charting their emotional development over the course of the series. It’s a shock to discover child prostitution in a sci-fi/fantasy comic book, but now that it’s in there, I want to see how this weighty issue affects and shapes the characters involved.

In terms of narrative structure, there’s about half a dozen main characters in three different places revolving around the same game of cat and mouse. It’s not desperately original, but I’m willing to sit back and see what Vaughan does with it. He spends most of the first volume playing with expectations of empowerment. Sure, some characters can fight off massive nasty creatures from the abyss; they can also get murdered by a bunch of thugs in a street fight – it mostly depends on who gets lucky. There’s potential for battles to go either way, and that’s a significant plus. Characters aren’t off-limits: they can die, and they do die. It’s not quite George R.R. Martin, because nobody is quite like George R.R. Martin, but it’s heading in the same direction. The one difficulty that Saga encounters is that it’s trying to depict an intergalactic conflict from the inside. The focus is on a series of individual characters, and the narrative never pulls back to display the supposedly breath-taking scale of the conflict. The two sides clash once or twice “on-screen” but only briefly, and only as the background to the relationships between main characters. That’s fine for something stylised, like Shakespeare or the opera, but Saga feels like it’s trying for a realism vibe (at least as realistic as sci-fi/fantasy mash-ups get). Perhaps a grittier tone would have better suited the content, but it is only the first volume. I’ll be keeping a close eye on Saga to see how it develops.
This article first appeared in Issue 13, 2014.
Posted 2:07pm Sunday 25th May 2014 by Laura Starling.