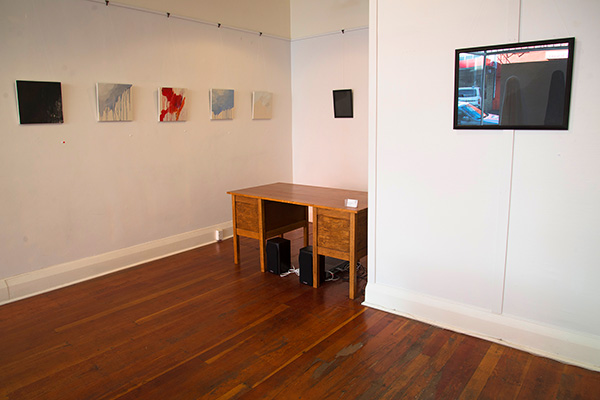 Mint Gallery
Exhibited until 29 May 2014

“Form and Void presents a study in contrasts by staking out a liminal territory between cadence and dissonance, presence and absence, potentiality and actuality. While eschewing iconographic elements, the work of this collection continues to engage with wider thematic narratives concerning the nature of creation, being, apocalypse and redemption.”

I have been going to Mint Gallery a lot recently because their exhibitions have been developing strongly all year, and I have been really enjoying my time there. I recommend joining the mailing list for opening nights (free wine); often the artists are at the openings and can sometimes string together an inspiring sentence or two, which is nice.

The current exhibition on display is Form and Void by Brendan Jon Phillip. It’s morbid and anxious, passive and introspective, and the artist continues to expose his growing interest in the physical and the metaphysical; what exists, and what is devoid, and what does it all mean. As a creative existentialist continually questioning life and death and everything else, I’m really into his moody metaphysical aesthetic and love his work.

Phillip studied at Whitecliffe College of Art and Design and Elam School of Fine Arts, as well as receiving Distinction in Film and Media Studies at the University of Otago. He has been a practicing artist engaged with experimental aesthetics through a variety of projects, spaces and media for over 15 years in Auckland, Wellington and Dunedin.

His previous exhibition, Holy Ghosts and Talk Show Hosts, re-imagines the symbolism of the Dutch vanitas tradition (a tradition that has been explored often in contemporary art) of the 16th and 17th centuries through the utilisation of plaster skulls, candles and bubbles that serve to remind us of life’s brevity, through an altogether more contemporary and disparate perspective.

The recurring use of skulls and cartoonish ghosts in Holy Ghosts and Talk Show Hosts brings together the mundane and the metaphysical, the divine and the day-to-day, through a vibrant layering of iconography, pure form and textual elements to generate a palimpsest of human experience, and these ideas have been simplified and transferred to Form and Void, which elaborates on the narrative of dissolution and dissonance as an impetus of liberation that has become characteristic of Brendan’s practice.

Form and Void comprises a series of paintings, which are mixed media, using various hues of black and white, red and blue – contrasting colours, for obvious reasons. The horizontal and vertical contrast of the canvas surface and media also works as an underpinning aesthetic for Phillip’s interest in binary oppositions. The trial and error process by which he works is also informed by Phillip’s interest in relational dialectic theory and process.

What I found most interesting about the whole exhibition are two conceptual ghost pieces that hang in the window of the gallery. These black and white ghosts (made out of what appears to be raw-hem sheets) literally linger in the gallery space, becoming an iconographic key to opening a new aesthetic and ideological territory surrounding notions of presence and absence. Each work appears tactile and abstractive, with ghost-like traces of form suggesting a balance between such opposites.

Such a fixation upon such morbid iconography, at such a simple level of production, signals a sense of liberation from the exhaustive, meditative and philosophical act of painting. The inclusion of the ghosts confronts the reality of death and mortality and the sensational effects from such an experience affects the way we view our own flesh and existence.
This article first appeared in Issue 13, 2014.
Posted 2:07pm Sunday 25th May 2014 by Hannah Collier.