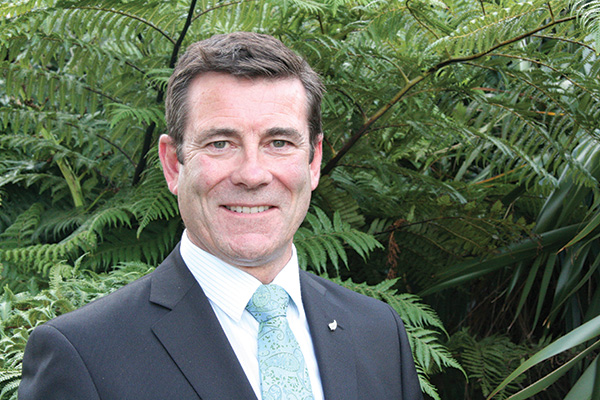 Michael Woodhouse is a National Party list MP based in Dunedin. He takes care of both Dunedin North and South, and is the Minister of Immigration, Veterans’ Affairs, and Land Information. He is also Assistant Minister of Transport.

Why should students vote for you? What do you want to do for us?
Didn’t I answer that? Well, just cut and paste that answer out of the previous [issue in which I was interviewed for Critic]. No, look, I think students by and large tend to be very focused on the here and now. And that’s really important and it’s important to me that they have the best education they could possibly get. And I think they do. At the University of Otago we have one of the finest institutions in the country, we certainly have one of the best health science faculties in the world, and the Government wants to make sure that’s the case, and I work bloody hard up in Wellington to make sure that’s the case.

So is there anything specifically you want to do to extend that down here, specifically to Otago and specifically for Otago students?
Well in terms of the University, it’s important that we grow … so my role is to make sure Dunedin is in the mind’s eye and it maintains its status. One of the things it can do, I think, is grow its programmes, so domestically, Dunedin and Otago are seen as the first choice for intending students, and it markets well across the country, but also to international students. Increasingly education and research is international … I sense there’s a reluctance here at the University to get too big in terms of international students, and that is true, I think there is a point over which the mix becomes problematic, may potentially undermine the special character that is Otago, but as Minister of Immigration, I work very closely with Steven Joyce to make sure that our international and our export education is growing, and I want to make sure at a micro level that Otago is part of that.

So in a nutshell, what’s the best thing you’ve done for Dunedin so far? Like a policy or just one quick …
Look, in terms of Dunedin work, I’ve gone in to bat for a whole pile of things. But actually I think the work that I do in the Dunedin office for individual constituents is the thing that I’ll sit in my rocking chair and be the most fond about. And as a list MP, frankly it’s a pejorative term, even amongst my colleagues, we are considered lesser beings … Yeah, there’s nothing better than being able to pick up the phone and go “Mrs Brown, we got a win for you on ACC.” Well not immigration now, actually, I can’t deal with immigration, sadly, but you know, whether it’s a mental health issue or a housing issue, or … they’re good ones to get. And I also think, and I’m not going to shy away from the other issue, we’ve gone through five years of really, really tough economic times. And yep, Clark will tell you that they had successive surpluses and all that sort of stuff … well, they didn’t, ‘cause 2008 was a dog’s breakfast, and the structural spending increases that were bedded in between ‘05 and ‘08 led to projections by treasurers of ten years of deficits. And we had to fix that really quickly. So being back to surplus in year five is, I think, a bloody good result. Particularly when you super-impose Christchurch, Canterbury earthquakes on that. So what’s my goal and role in supporting Dunedin? It’s to make sure that we don’t go backwards.

Just to move away from Dunedin a bit, do you agree with your Australian counterpart’s policy on asylum seekers?
Well, let’s put this in its broadest context. From a regional perspective, New Zealand plays its part in ensuring that irregular arrivals, and we’re talking about maritime arrivals, boat people, are disincentivised, discouraged, and then managed. So we’re talking about three dimensions here, and New Zealand doesn’t have, yet, an issue. We haven’t had a known maritime arrival … I can’t judge Australia’s response, because I’ve never been a Minister of Immigration where thousands and thousands of boat people are arriving on shores every month, and I think we need to contextualise that. New Zealand has a good response plan, we’ve been exercising Operation Barrier for four years, three years, we finesse it every time we do it, and I’m satisfied to the degree that we can, we are ready if it happens. We have a naval, a medical, a biosecurity, a customs, a police, and a judicial response, ready to go when we need it, and I will lead that. I will be the person. But I’m not going to sit here and judge Australia for what they do and don’t do, it would not be appropriate of me to comment on that.

Why wouldn’t it be appropriate if it were a question of human rights?
I think it’s because I don’t understand that context. The geopolitical situation in the North of Australia between Australia and Indonesia and Papua New Guinea is a very difficult one. What I would say, in a more general sense, is that everybody has the right to be treated fairly, consistently, quickly, and consistent with refugee conventions. And as far as I can tell, while there’s been a lot of noise around that particular thing with Christmas Island and Nauru, I’ve seen no clear evidence that there are human rights abuses in those places that is being perpetrated by the Australian Government.

Surely it is the Australian responsibility if they are the ones that put the people in the situation in the first place should human rights abuses be carried out. Surely Australia has some responsibility to deal with that?
What I would say is that anybody who has a person who is detained and detentioned has a valid response under UN convention on refugees … [they] do have a responsibility firstly to provide security to its own people, secondly to provide basic physiological and safety needs for the people detained. That’s nourishment, shelter, general protection … but some of the things that have been going on, particularly the destruction of places in Nauru, make that problematic. And of course it wasn’t the Australian government that burnt down the detention centre.

Okay. Do you have any particular opinion about the recent book that came out that was marketed to possible asylum seekers? It was a comic essentially, made by the Australian government, and the underlying quote was something like “you will never come to Australia, you will never live in Australia.” It was like a comic book and it was handed out essentially saying “never, never again.”
No I didn’t see it, what I do know is the previous Labour government had a very active, as part of their disruption plan, they did have quite an interesting media propaganda strategy, which did involve, from time to time, full page ads in daily papers in Sri Lanka, Indonesia, hopping off points, basically. To simply say “do not come. The smugglers are telling you lies about what will happen when they get there.” And I think that’s necessary. So I can’t comment on the comic book, but to give you an example of that, we were aware through a four corners programme last year, of two well-known Indonesian people smugglers in Malaysia who were recorded as saying “when you arrive in NZ you will get residence after 35 days, you will be supported, you will get this, that, the next thing.” And it was nonsense. And we do need to, because they are seducing vulnerable people, to pass over money and then to put their lives at risk in sometimes very dangerous waters, and they will do that, because they’re selling the reward. A reward that is non-existent. And I think it’s incumbent on us to make sure that is told to anybody, desperate though they are, and I completely understand, you know, some people’s desire to take that risk. But if they take that risk because of lies told to them, look honestly, if there is a hell, the hottest spots will be reserved for these people smugglers. They are heinous criminals. And I think we need to – we sit in judgement from a long way away, on a situation that we do not understand and I hope we don’t have to for a very long time. But it would be naive to think that this could never happen in New Zealand.

Can you tell me – what was your reason for your vote against marriage equality?
Oh, quite simply this. I don’t care pretty much who does what with whom and where. And I’ll state that again. A lot of people think this is some kind of fund[amental]y religious belief I have. Well, there’s nothing further from the truth. And I’m very much a live and let live kind of guy. Probably far more socially liberal than people give me credit for. But that live and let live involves the ability of other people to hold a different view and not to have others’ views forced on them … Now, that said, there were a few aspects of civil union legislation, which I’m quite relaxed about, that actually didn’t give same sex couples the same rights, and that could’ve been fixed, and I would have supported a civil union law that was for everyone, and then leave marriage for whoever wants to call it a marriage. And here’s the problem, right? Through that whole debate, it was really explaining things losing that stuff, when it’s really a hot button socially liberal issue; to try and explain that to anyone is to bore them to tears, so it was way easier to say “oh, he’s a fundy.” ‘Cause that’s how it was represented by many groups, and I had a lot of social media stuff saying “please explain your reason for voting against this bill.” how the hell do you put that in a tweet?

Cool. One final question, and it’s just a fun one. You travel a lot, what’s your favourite place?
Rome. If I was to say (it’s out of a long list, by the way), but if I was to go and plant myself in one place for a few weeks and just explore, it would be Rome. It’s ancient. I like old. I like old architecture. I’d go to Rome with a friend of mine who’s a classical studies graduate from Otago. That would be my Utopia and some nice Italian wine and good food and my family. That would be my ideal holiday.