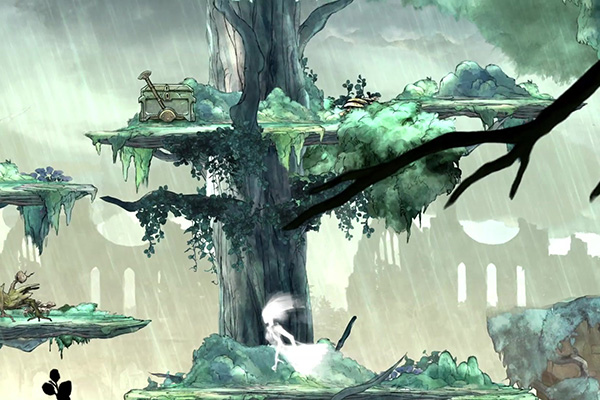 The gaming industry was born in Japan, and there it lived for several decades. But it wasn’t long before western developers began to spring up by the handful, and now the power has shifted and the bulk of development happens in western countries. Because of these distinctions in culture and approach, a very clear separation has been created. (Without fail, I could identify the east or west origins of a game after only a few frames.) This dichotomy is wonderful in many ways, as it offers players internationally a diverse range of style and gameplay. What is even more wonderful are the rare moments in which developers amalgamate styles from the east and west. Child of Light is the latest example, and one of the most wonderful, of this marriage.

Amazingly, this game is not an indie group’s homage to eastern games, but rather a product of one of the world’s biggest publishers, Ubisoft. Few publishers in the world would offer their developers the freedom to explore less lucrative game styles and genres, but over the last couple of years Ubisoft have shown themselves to be passionate about games above almost everything else. The team responsible for the creation of Child of Light was almost entirely comprised of the developers behind 2012’s Farcry 3.

In the ultimate display of east-meets-west, Child of Light tells the story of Princess Aurora of Austria at the turn of the 20th Century as she searches her dreams for her father; a very western premise. However, the gameplay is modelled after some of the greatest Japanese RPGs ever made, as well as adopting a stunning art style inspired by the work of Studio Ghibli and Yoshitaka Amano. These two worlds collide to stunning effect. The very Germanic story, carrying all of the dark whimsy and wonder of ancient Europe, the art style that realises this journey with a unique and beautiful twist and the gameplay grounding it all within something comfortingly familiar but wickedly fun, speak volumes for the game.

A downside, however, is that the story is told completely through the use of a very regular rhyme scheme and meter. At times this can make the story stunningly beautiful, carrying with it something approximating the verse of a classic fairy tale. Unfortunately, the writers of Child of Light only had few such moments, and for a great portion of the game the rhyme and meter either falls flat, or manipulates the dialogue in a wholly unnatural and clunky way just to make the lines work. There are many moments when you wish the rhyme scheme and meter wasn’t such an integral part of the game, as it often pulls you out of the game rather than pulls you further in. This problem is slightly alleviated by the developer’s willingness to play with the convention, such as a character who always sets up great rhymes and then is unable to fulfil them, making the other characters jump in and correct her.

Your exploration of Aurora’s dreamland Lemuria takes place within a 2.5D side scrolling landscape that is reminiscent of the recent Rayman games. This is because the game was constructed in the same engine, though aside from the similar framing, the games couldn’t feel more different in execution. Child of Light has a keen focus on exploration. You start the game exploring the world on foot, trying to find secret treasures and solving puzzles to progress. This section felt very grounded and although fun I couldn’t help but feel that there were things out of reach. This is because not far into the game Aurora is given the ability to fly, and it opens up the exploration completely, making the vertical and horizontal exploration of this gorgeous world an absolute pleasure.

This pleasure is only amplified by the superb combat mechanics. Like some Final Fantasy iterations and the Grandia series, Child of Light has a real-time-combat system. This operates through a bar at the bottom of the screen, which has each of your allies and the enemies on it. You travel across the bar and when you reach the end you are able to attack. The strategy comes from juggling the timing and method of your attack so that you do the most damage, while also interrupting your foes’ attacks. Like all good systems, it is easy to enter and hard to master. Yet your mastery of it is almost bound to happen, as the game makes clear how to do so through a superbly designed progression system that clearly demonstrates what different combat strategies each of your allies can take and how they will interact with each other.

Child of Light is a superb amalgamation of aspects of a refreshingly diverse number of cultural and artistic styles. Despite the generally clunky nature of the poetic dialogue, this is an experience truly worth having.
This article first appeared in Issue 12, 2014.
Posted 4:32pm Sunday 18th May 2014 by Baz Macdonald.