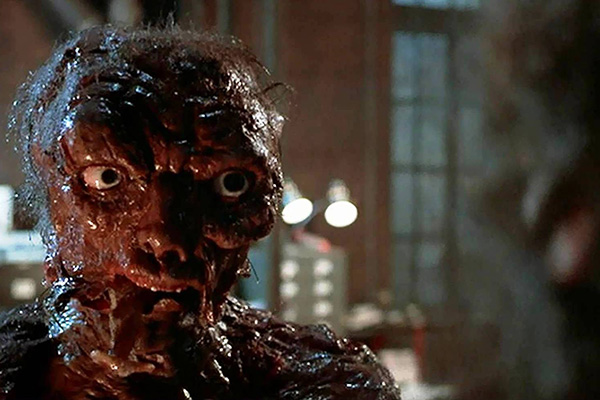 Cast your minds back, to a time before computers, when filmmakers where stretching the minds and imaginations of millions of moviegoers without the help of CGI. It’s getting harder and harder to remember such a thing, especially as such effects become cheaper and easier for any filmmaker to use. But there was a time when the unimaginable was created using only costume and the creativity of the directors. There are many great costume effects from this era, such as Alien and anything from the original Star Wars films. However, in my opinion, the greatest movie monster of this time was David Cronenberg’s The Fly.

Jeff Goldblum plays the brilliant young scientist Seth Brundle, who has quietly unlocked the secrets of teleportation. The first half of this film is Brundle’s victory lap. The shy, young scientist is about to change the world and has already scored the girl, a journalist (Genna Davis) who is also documenting his discovery. That is until Brundle takes the leap, deciding to use himself as a human test subject. The teleportation works perfectly, or so it seems. Unfortunately for Brundle, a fly snuck into the chamber with him and their DNA was combined.

So the transformation from man to fly begins. The real brilliance of Cronenberg’s monster is just that: the transformation. We follow Brundle through each excruciating moment of his metamorphosis. The ideas put into these changes are designed to be as deeply affecting as possible by tapping into the innate and universal body fears we all have. I mean, fingernails and teeth falling out are straight from the psychology textbook. But that’s what it is about Brundle’s disgusting and disturbing transformation that gets under your skin – you can’t help but go through the transformation with him.

David Cronenberg’s The Fly, despite being almost 30 years old, is still hugely relevant today because it voices fears that we have, and will always have, about our bodies. And on top of that, it’s just a superbly written, performed and directed movie.
This article first appeared in Issue 12, 2014.
Posted 4:32pm Sunday 18th May 2014 by Baz Macdonald.