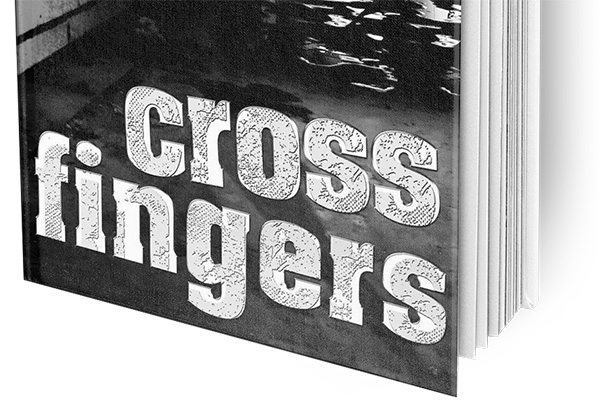 Cross Fingers is a thriller by Paddy Richardson. The tagline says that Cross Fingers is, in fact, psychological crime fiction, but I don’t feel that the pacing gives you time to stop and think. So thriller it is. One Rebecca Thorne, a not too hard-assed, plucky reporter lady who gets sexually and otherwise harassed, but eventually triumphs over adversity, narrates the story. You probably know the type. She’s very much the type.

Rebecca is about to pull together a documentary exposing the depravity of a crooked property-investment jerk, when her boss pulls her off that to make a documentary about the Springbok tour protests instead. Rebecca considers the subject to have been covered enough already, but for those of you too young, poorly educated, and/or foreign to know anything about the Springbok tours, allow me to explain.

There were a bunch of white people living in South Africa who were being racist douchenozzles. A huge hunk of the New Zealand population were pretty sure that they didn’t want to play sports with said racist douchenozzles and decided to yell about it on the street. Another hunk of the New Zealand population were pretty sure that they wanted, nay, needed to play sports with everyone that they could possibly play sports with, and that included racists. The NZ Government was all like, “Come on, people of New Zealand. Why can’t you just let the white South Africans have their racism? They are living the dream and you are ruining it for everyone. We can’t just let a mob decide for everyone that racism is bad and we shouldn’t condone it. Awh, screw it, guys, let’s unleash the police brutality.” (Note that claims of police brutality are contested and it may in fact be possible that no policeperson ever kicked a non-violent protester in the head because they felt like it.) While all this was going on, the actual rugby players were a bit bewildered and just wanted to play rugby.

Basically it was all a great big ugly mess, and you should be very grateful that you live in a time where people protest racism on Tumblr instead of on the street, and police brutality en masse is a trillion times more likely to be condemned when it is recorded on someone’s phone and everyone can see it for themselves.

Richardson deals with this difficult subject matter pretty damn competently, I gotta say. You don’t need to know about the tour to enjoy the book, but none of the necessary exposition is clumsily handled, and the subject itself is so interesting that you’ll actually believe learning is fun. Richard’s prose is nothing fancy, but competent; it does the job of story transference well, and moves fast.

For these reasons and more, I really enjoyed reading this story, right up until the point where its whodunit-reveal turned out to be some tiresome reiteration of a vapid hate-cliché. Obviously I can’t tell you what this mildly surprising twist is, since spoilers are like the reviewer’s bad touch or whatever. But I don’t think I can in good conscience recommend a book that I enjoyed right up until the point where it really bummed me out, though I did think it was worth reading right until I realised it wasn’t.