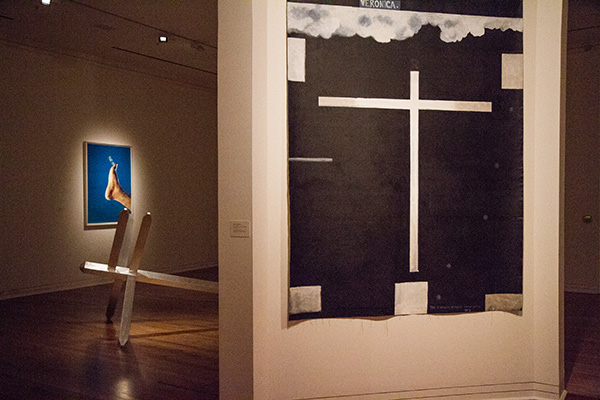 The Dunedin Public Art Gallery’s Belonging displays a privately owned collection of works that features various artists (national and international) whose work is both bold and rich in religious references, symbolism and iconography, including the cross, crucifixion, angels, the bare foot (which is known as a sign of humility and respect) and the pieta (the Virgin Mary cradling the dead body of Jesus).

Since the birth of Christ and the tales of his existence that have been told thereafter (those spiritual stories that comprise the fabric of all religions), people have expressed an inherent desire to belong or to be important to something; something greater than themselves. Belonging raises questions about the role of religion in modern life and how much faith we should really put in these material fabrications.

The collection begins appropriately with Colin McCahon’s “The Five Wounds of Christ, No. 3” (1977-1978.) Centred in the blackness of the canvas, a white cruciform hovers and Christ’s body is assumed to be the form of the cross he died on. At the canvas edges, the five wounds he suffered are represented as angelic white light; ghostly apertures, small white windows on the surface that open into the blackness of the canvas.

McCahon’s paintings are always rich in visual cues for its viewers, and here the central clue is the word “Veronica.” As Christ struggled toward the cross, a woman called Veronica wiped his face with her veil, which picked up a bloody imprint of Christ’s features. The story of Veronica’s veil was clearly an instructive one for McCahon, who wanted his paintings to do more than just illustrate the mystery of faith and resurrection. He wanted paintings like this to do what Veronica’s veil did – to offer a material trace of that mystery.

Moreover, the black paint that covers the work contains the artist’s own handprints, as if he were pressing his own body against the surface of the work; metaphorically testing the depths of the darkness he has created. Like any other McCahon, its conceptual complexities lie in in its visual austerity.

The next piece in the collection is Jacopo del Casentino’s “Two wings from a Tryptich” (c 1340-1350). Small in size, and executed in gold and tempera, the two-thirds altarpiece displays classic biblical imagery – most obviously the crucifixion of Christ on the left. Though the image on the lower right panel seems to be the most curious to a modern viewer, which shows St Francis of Assisi receiving the stigmata – the wounds corresponding to those received by Christ on the cross. Francis was one of the most well known Christian saints who reputedly lived from 1182 to 1226. Born into a wealthy family, he renounced his former life after a series of revelations from God (… beautiful).

The following piece is a photograph by Giovanni Intra, “X: Best After 33 AD,” (1993), which features what seems to be the foot of Christ in a contemporary medical perspective. After all, the artist’s intention was “to show what would happen if Christ turned up to the Auckland hospital.” The decaying foot is photographed against an antiseptic-blue background. Although the intention to reflect a morgue-type situation is clear enough, the image is just revolting and uncomfortable to look at, and for such reasons, I can’t help but feel it was at odds with the rest of the work displayed.

There are numerous sketches and engravings, which follow on the next wall, including pieces such as Lucas Van Leyden’s “The Crucifixtion” (1517) and Annibale Garracci’s “Pieta” (1597).

Finally, tipped onto the centre of the gallery floor, is “The Deposition” (2002) by John Reynolds, a large polished aluminium sculpture in the shape of, what appears to be, a signpost. The sculpture carries no words or imagery, and completely surrenders the upright authority we expect of any sign. Reynolds seems to be laying his own cross-like signpost motif to rest, and in the process extending his career-long conversation with New Zealand’s most famous painter of crucifixions and Christian imagery, Colin McCahon. With its nameless surfaces, Reynolds’ “Deposition” pointedly declines to give visual aids as McCahon’s work does.

The sculpture is, instead, literally and metaphorically reflective – a place to pause and consider the meaning of whatever journey we have just completed. Similar to the other works displayed in the collection, the act of looking in such an instance becomes an act of faith.