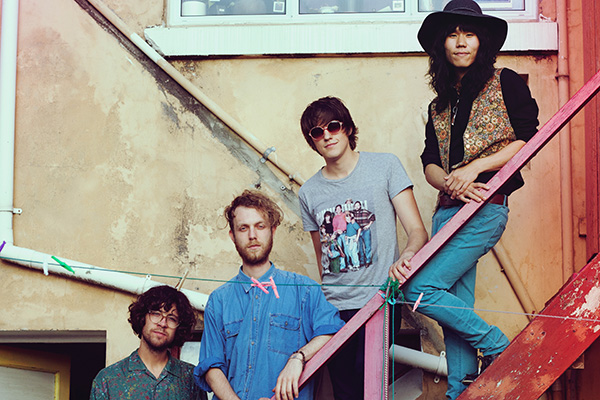 Auckland powerpop group Sherpa hit ReFuel on 30 May. With their new album Blues and Oranges set to be released soon, Adrian Ng caught up with frontman Earl Ho.

You released your previous album, Lesser Flamingo, in 2012. What have you guys been up to in between then and preparing for this new album?

We’ve all been trying to find the balance between working full time and doing something creative. Staying up late making music and going to work really tired, basically. Once we had the material we went into pre production and carved out the song stones into little stone sculptures. Some time was spent in doubt and frustration chasing the tail of perfection but it got much easier when we stopped chasing.

The music video for “Love Film” makes quite a few references to the French New Wave. Can you tell us about the song and the production of this video?

We’re all big fans of Godard but in terms of the video all credit goes to the director Marc Swadel. He came up with the idea; he was going to Paris to live at that point so we were very lucky to work with him.

In terms of the song, it’s an ode to the activity of filming and capturing beautiful moments. I wrote it in university and it sums up what I was studying, really. I was doing a conjoint degree of music and arts. In music the assignments were to write songs, and in the film papers I had to watch and study movies, and funnily enough and serendipitously Godard’s Breathless was one of the films we were studying. The other main ingredient was that there was and still is a girl to which that song is dedicated.

Your video for “Quittime” also references another artistic movement, this time citing surrealist art. It’s a beautiful song and video. What steered you into making those decisions visually?

I think you’ve chosen the right word in “steered” because that is all we did once again. We looked through a few treatments for the video and a lot of them were really great but just lacking the type of correlation we wanted between the song and imagery. Then I remembered a production company, which turned out to be Ready Steady Studio, from a couple months back for a different video they pitched on. I remembered that they used the film The Holy Mountain, by Alejandro Jodorowsky, as a reference. If anyone reading this has seen the film, you would know that this film is totally out of this world and one of the most visually and conceptually stunning films ever made.

Once we reached out to these guys we were immediately on the same page and they filled in all the gaps and they came up with the concept very quickly. Once again we owe all the credit to the director Misma Andrews and producer Jacob Perkins and the rest of their crew, who made all the visual decisions. I just had to get into a bathtub with some fish and walk around the desert.

Blues and Oranges is a very visually striking title for an album. I like it. Choosing album titles can be frustrating. Did the name come easy?

Thanks for liking the title! The title came a while back, way before we started to record, in a conversation with my girlfriend. At that point we knew her and I knew it was a phrase that carried some weight just because of the multiple meanings it could hold. She actually then subconsciously painted our album cover, again before we even had an album, which was a portrait of a face with the main colours being blue and orange. This painting, which I bought, had been hanging in my room looking right at me and one day everything fell into place and we superimposed a rotting orange behind the face and there it was, the cover for our album, as well as the album title.

In what seems like a period of frustration, umming and ahhing over what to call our album and choosing the album cover, turns out it had already been written and done. So the name came very easily.

What can we expect from the upcoming album? Is it a shift in direction or more of an evolution in sound?

I would agree with it being an evolution of the sound, for sure. To me it doesn’t seem like too much of a departure in a way that there are similar themes and they could almost be parts one and two of some kind of trilogy. Right off the bat one thing that is different was just more consideration with the lyrics. In Lesser Flamingo, most of the lyrics were first drafts. That is not to say that this is not a valid way of writing lyrics, because the first time may be just what you need, but this time around there was a lot more thought.

Sonically we have definitely put more emphasis on synthesisers and we got obsessed with the sound of the 808 drum machine on our drummer’s SPD drum pads, so expect a lot more low-end. Besides those factors we are using the exact same instruments. So in that way it’s like the debut album is a Charmander turning into a Charmeleon. It shares the same DNA but looks a little different, a little big bigger, had a few more experiences, and logically it would make sense that it would be better, too.

Is songwriting quite a collaborative process? Has this changed over the years or has the process remained pretty much the same?

Up until this album I had been the main songwriter, whereby I would bring the songs in and we would arrange the songs together, but this time around Ben Jack (the other guitarist) really blossomed as a fantastic songwriter and it is his songs that open and close the album, and we collaborated on a couple, too.

There was one moment during the writing process where Ben sent me a demo of a song he wrote called “Sunrise” and it was really awesome and blew my mind. With that came a bit of shock as it brought in my competitive side, which I think was exactly what I needed. So straight after, whilst still inspired by Ben, I wrote a song called “Die Jung.” I demoed it quickly that day and sent it to Ben and in that moment he penned the song “BZZY,” which he then sent to me and I began to add the melody and lyrics.

It was a pretty magical day and I would love for more of these moments to happen for sure.

Your live sets are renowned for being energetic and fun. I’ve been to one of your shows so I know that to be true. Is it hard to maintain such a high energy while playing, especially when you’re touring? Or is it just a rush as soon as you get on stage?

I would say yes, it is definitely hard to exert a lot of energy in your physical gestures as well as having to play an instrument and sing. But like anything, with practice, it gets easier. The adrenalin of playing live is hands-down the best drug ever and in my experience even if I’m feeling like absolute shit before the show, when we start playing, the adrenalin has never failed to come.

Any fond memories of playing in Dunedin?

Yeah, recently we came down and played the Chick’s Hotel with Clap Clap Riot and after their set we got up on stage with them and did a very rowdy cover of Twist and Shout by The Beatles/The Isley Brothers, which was pretty warmly appreciated.

Then soon after, thanks to the wonderful Jon Bakos, we did a late night radio show at Radio One, albeit a little intoxicated. Which was hilarious to us but maybe not so much to whoever was listening.