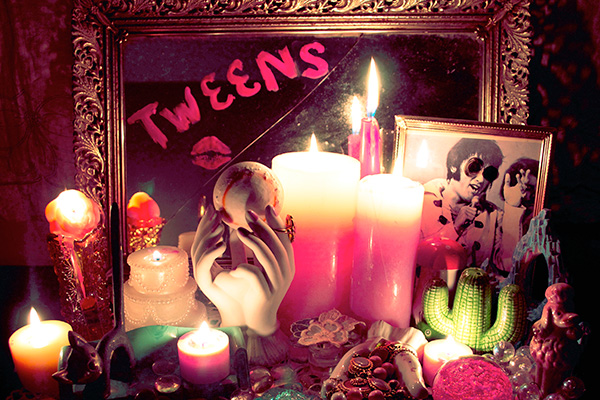 Although the Cincinnati noise-pop trio are not actually about to enrol in their first year of high school, the name isn’t entirely inappropriate. They’re bratty, they’re full of energy, they’re bored. These guys don’t deliver a lot of thoughtful wordplay or wise life lessons; instead Bridget Battle will tell you, in true tween style, what she wants and when she wants it at the top of her voice. It would be easy to lump Tweens in with the lo-fi pop trend that happened a few years ago (Wavves, Dum Dum Girls) and dismiss them as latecomers. But Tweens don’t seem to quite fit that mould, drawing more from bands like Be Your Own Pet, Yeah Yeah Yeahs and even Blondie.

The album starts fast with “Bored in this City.” Battle cries that her town “is eating her alive” in an infectious blown-out chorus worthy of Perfect Hair Forever. From there it is a sprint to the finish, with few stops for Battle, or the listener, to catch their breath. By the time slow-burning “Want U” comes around at track 10, the wavey echoes of guitar are a sweet relief from the aggressive playing that dominates the album. Battle is reminiscent of Bethany Cosentino as she worries about thinking “way too much” and uses straightforward cliché lyrics like “all I know is I want you.” “Star Shudder” ramps things up one last time, borrowing heavily from Nirvana’s “Stay Away.”

While the songs on this album aren’t bad at all, Tweens sounds more like a band you’d want to play in (or at least see live) rather than play through a pair of speakers. With relatively basic song writing and playing, these songs rely on the energy and grit that comes with live performance. It’s hard to imagine this album sticking around to make a lasting impression. Kim Deal likes them though, so that’s cool.
This article first appeared in Issue 8, 2014.
Posted 4:31pm Sunday 13th April 2014 by Peter McCall.