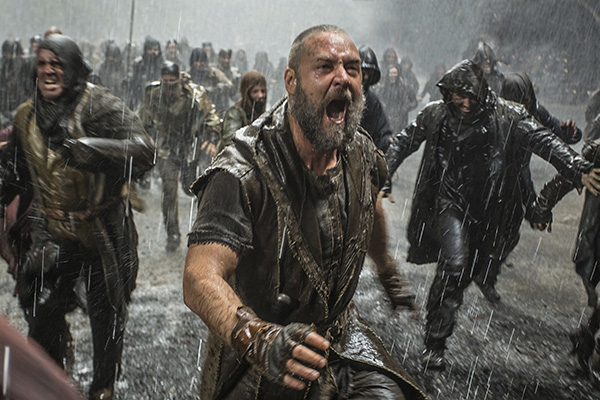 Rather than a faithful and preachy account of the Bible jazzed up into a feature-length, Aronofsky attempts a blend of biopic, CGI fantasy, gritty reboot, and ecological fairy-tale which moulds the well-known story of Noah into something entirely new. Any moral preaching is reserved for environmental rather than biblical causes; a good fit for a story about a man who saves a boatload of animals, but delivered with such unapologetic bluntness that it feels ... well, preachy.
Crowe is well cast in this complex and dark take on the biblical character, explored in unforgiving depth. The muffled screams of those left to die heard through the walls of the Ark is something left out of most children’s books, but it makes powerful and thought-provoking cinema, well-suited to the harsh morality of the Old Testament.

Dealing largely with the emotional, moral and existential dilemmas facing Noah’s family, the film leaves many of the practical questions of the story (food and basic reproductive biology) untouched. Though possibly more sensible than trying to fill every plot hole in Genesis, this tempers the powerful angst Noah otherwise paints beautifully, and the result is a confusing sprawl that teeters between a human drama that makes no sense and a fairy tale that takes itself far too seriously.

Puncturing suspense of disbelief in an entirely different manner, some of the CGI – the parade of the animals, the Lord of the Rings-style battles – isn’t quite up to standard. That said, the beautiful time-lapse shots of the creation of the universe are almost worth the ticket price alone, and the CGI destruction of the world is delivered with all the pomp Hollywood can muster.

There’s a lot to enjoy, as a spectacle, and even as fuel to a good discussion about religion or environmentalism, but Noah itself never quite gels into a coherent film. All in all, it’s a miss, but a near one; genuine ambition and vision played out with big blockbuster money. That has to be worth something.