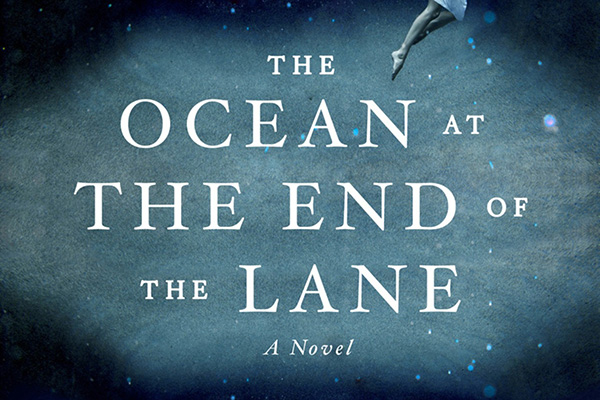 The Ocean at the End of the Lane

The Ocean at the End of the Lane is the latest novel from best-selling author Neil Gaiman. If you’ve never read any Gaiman, he’s sort of like the modern day Grimm Brothers, except there’s only one of him and he’s not German. Generally his works are modern day fairy tales with a great deal of dark, adult content – part of which ties back to his strong influence in Alan Moore (Watchmen, V for Vendetta). Some of his works are child-friendly – in Chivalry, an old lady finds the Holy Grail in an op shop and takes it home. Sir Galahad comes looking for the Grail, and thus the story begins. It’s sweet and unassuming, and that’s pretty typical of Gaiman. On the other hand, there are stories like American Gods, where you get women with teeth in their vaginas who eat the men they’re screwing (mantis-style). That’s pretty typical, too.

The Ocean at the End of the Lane falls neatly in between the two categories. It’s about an unnamed male narrator who returns to his childhood home, remembering the crazy mystical shit that happened when he was seven. It began with a lodger stealing the family car and committing suicide in it, which is pretty hefty stuff for a seven-year-old – but that’s one of the interesting things about Gaiman. He doesn’t shy away from the fact that kids aren’t insulated like we’d like them to be. There’s also a sort of emotional buffer for the reader because you’re hearing about it from the perspective of the narrator forty years later. That distance between childhood and adulthood is a key theme of the novel, explored through the gap between the narrator and his younger self, but also through the child’s relationship with adults around him. Some of them commit suicide and some of them are powerful ancient monsters out to rule the world. Discerning the wheat from the chaff is part of the development into maturity, although, again, the adult narrator provides an unspoken assurance that the child will turn out okay.

The plot of the novel revolves around the ancient powers stirred up by the suicide. One of the powers sneaks through into the real world, and attaches itself to the narrator’s family in the form of a bustling nanny. The narrator immediately sees through the façade, and tries to persuade his family that the nanny is evil, but they all ignore him and the nanny sets about doing evil things. It’s an intricate way to explore the feelings of frustration and helplessness that a child experiences, and it’s mixed with a growing awareness of the very human flaws and failings of the narrator’s parents. The refuge from these insecurities is found in three women who live on a farm at the titular end of the lane. They are supernatural figures who’ve popped up from time to time in other Gaiman novels, but here they’re all brought together as one cohesive family. Their magical abilities are quickly revealed, and they are established as secure, reliable people. Where the narrator is terrified by the nanny, who appears to hold the power of life and death over him, the women aren’t really all that bothered. They certainly set out to deal with her, but she’s always considered more of a nuisance than anything else. It’s a rather touching way of espousing myth and the supernatural as the emotional foundation of humanity – a sort of bastion against the pressures and difficulties of life. It’s a nostalgic novel, but at the same time it’s very aware of the difficulty of negotiating a path through a treacherous, uncertain world.