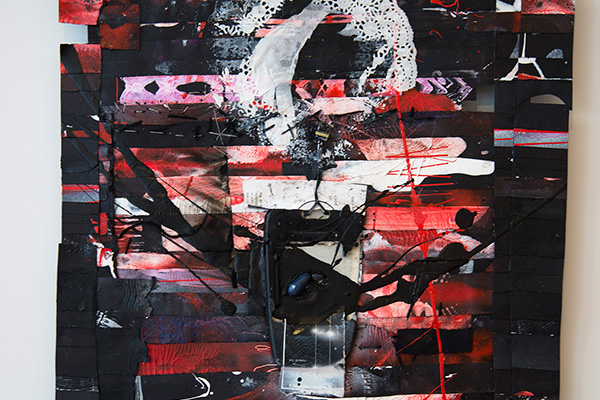 Mint Gallery is currently exhibiting EXORCISE (E) by award-winning artist James Robinson. Robinson was born in Christchurch in 1972 and currently lives in Dunedin. He completed a Bachelor Of Fine Arts at the Otago School of Fine Arts in 2000, and a Foundation In Fine Art at Nelson Polytechnic in 1990. Since then, Robinson has exhibited regularly in private and public galleries both Nationally and Internationally and his work is held in numerous public, private and corporate collections throughout New Zealand and Australia. Working as the William Hodges Fellow in Invercargill over the past year (which also resulted in a six-month New York residency), James has created drawings, paintings and collages in a methodical large series across a broad range of mixed media and technique as seen in EXORCISE (E).

Robinson’s works in the past deal with trauma and elevated levels of emotion, and his most recent work exhibits the same level of refined skill application, as each work leaves some kind of stain in one way or another. In his previous exhibition, Astral Weeks, exhibited last June, Robinson questions the crucial questions of life, existence and meaning, presenting his wonders in images of crystal skulls, pagan symbols, sci-fi images and obscure annotations which hint to his own uncertainty and misunderstanding. Similarly, in EXORCISE (E), we see a range of stylistic innovations and obscure annotations.

Robinson is clearly motivated by the complexities of his own intellect and life in the creative sphere, and his works seem to offer a balance between the conscious and unconscious; and the material and immaterial world. The anxiety and doubt of the modern world is revealed through the flurry of brightness and brilliance of his work, but it is disrupted by an insistent nagging commentary of constant uncertainty and questioning – i.e. the cynical annotations which ask the big questions, “why do I exist?” and “what does all this mean?”

Robinson does not necessarily provide these answers and it is unclear which side he falls on or whether he has decided for himself. The works are sincere, but not definite. Robinson says, “In the end, I don’t know if the works are meaningful or not ... whether there is ‘meaning’ or not at all ... it’s a kind of back and forth, an argument, but it’s a process that I need to be with right now.”

Robinson describes this body of work as a continuation of his New York series, integrating the nature of identity and globalism and what it means to be human in an increasingly inhuman world. Also inspired by nature and music, sex and movies, the works are described in the artist’s statement as “the horror of human evil and degradation on most fronts ... The failure by design implemented by our masters for want of a better definition … Covert, totalitarian, spiritual enslavement via self administered mind control surveillance, police-state of the planet and all them other silly irrational trifling paranoias I have as one of the mentally ill bio-chemical consumers gone faulty for some reason.”

The series is in close dialogue with Robinson’s on-going spiritual investigation between the more primal Eastern ideas of the mind and body, against the Western cultural values of materialism.

The surfaces are built up through various layers and processes of icons, texts and found materials, including string woven sacks, bottle caps, newspaper pages, straws and even HAIR. Using a variety of brightly coloured wet media, including pastel acrylic colours and water colour variations – as well as the blank areas of untouched surface, which reveal gaping holes or burnt, stitched and ripped out areas of inverted eruption – the paintings become a physical experience in themselves. Not only is there a strong sense of the artist’s actions in what is seen, the surface is so varied, pitted and textually excessive, there is visual complexity that one must weave in and out of in order to be able to take everything in. The agitation and anxiety of the artist is inherent, and this self-investigative oscillating work reveals the journey of the tortured soul within.

Robinson invites the viewer to participate in the search as we trawl through his trivial statements, symbolic forms and weird surreal vistas, trying to decipher any meaning. I couldn’t help but think there is no real meaning, and perhaps the works are just a manifestation of Robinson’s personal experiences, emotions and thought processes, recorded at the times in which they were felt.
This article first appeared in Issue 8, 2014.
Posted 4:31pm Sunday 13th April 2014 by Hannah Collier.