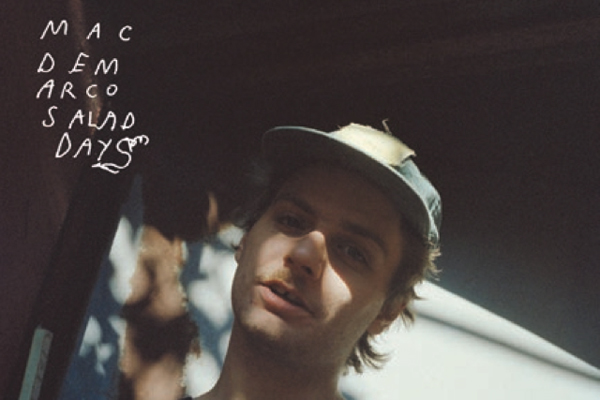 Near the end of 2012, i purchased Mac DeMarco’s second LP, 2, on the back of hearing “Ode to Viceroy” – a sweet love song for his favourite brand of low-cost cigarettes. It was refreshing, genuinely funny and somehow beautifully sincere – I hadn’t heard anything quite like it. However, neither me, nor the artist himself could have predicted his projectile rise to indie-stardom that immediately followed. Indie-kids everywhere fell in love with not just the music, but the man himself. What followed for Mac was a gruelling one-and-a-half-year tour that took him and his band all over the world – including sets at Primavera Sound, two Pitchfork festivals and even a few stadium shows opening for Phoenix. His third full-length, Salad Days, sees him coming to grips with growing up, losing his anonymity, trying to stay chill, and how it’s all affecting his relationship with his sweet Kiki.

Based on the opening few tracks, you’d be forgiven for thinking this record was stylistically an extension of 2. A number of songs, including the title-track, stick to the upbeat twangy guitar lines and funky bass combo that’s become Mac’s signature sound. Make no mistake, there’s plenty of bouncy twang-jams on Salad Days, but the use of a synthesiser, most notably on the creepy/sexy track “Chamber of Reflection,” adds a dynamic that separates this album musically from its predecessor.

The song writing on this record is more focused and meaningful than on either of his previous releases. He manages to maintain the simplicity of songs like “My Kind of Woman” but ties them to solid emotional ideas, each of them different – all killer, no filler. Little spoken adlibs add a bit of classic DeMarco levity to some of the darker tracks. He ends “Goodbye Weekend” simply with “ah! gigi bungsu!” (“wisdom teeth” in Indonesian). At the end of instrumental closer, “Jonny’s Odyssey,” he thanks us for joining him and assures us we’ll see him again soon. The pleasure is all ours, Mac.

You’d be hard-pressed to find another current indie act that matches Mac DeMarco’s sincerity and straightforwardness (especially on a heavily concentrated hype-band label like Captured Tracks). What allows his music to flourish in such a typically ironic scene is his acute sense of the difference between seriousness and solemnity. The silliness and lack of melodrama doesn’t detract from the genuineness of what he’s singing; it just makes it a bit more real. Salad Days is the sound of a guy completely at ease with himself – yeah he’s got some issues, but y’know, that’s life, man. What’s the point of getting all worked up? – “take it slow, Brother.”
This article first appeared in Issue 7, 2014.
Posted 4:50pm Sunday 6th April 2014 by Peter McCall.