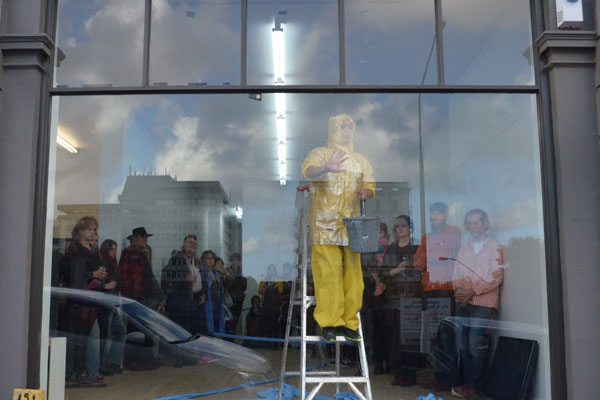 I met Samin Son at the gallery on the Friday morning following the opening show from his performance series. Having heard much about him from a mutual friend, I had wanted to make his acquaintance, or at least see him perform, for the most part of a year – his reputation for exceptional performances truly precedes him. On this morning, Son was genuine, fascinating and passionate, very much buzzing about the prospect of undertaking his monstrous 15-show series despite already having a hand wrapped in bandages after just the first one.

A relatively well-established artist, over the course of the series Son has continued on-going works such as Hammer Piece, and further built upon explorations of his two years as a South Korean soldier. He has noted in the past that while he was in the army he had trained for the riot police, had faeces thrown at him and entered real-life riot situations – it is renowned that the intensity of these experiences are well portrayed through his performances.

As high as my expectations for Son were, I was still left absolutely astounded by his performance of Touch Paste Contact. This piece, which saw him enter and circle the room while intoning some unrecognised phrase, was enchanting, displacing and confrontational. One moment he was tying select people together with one of those everlasting public toilet hand towels, forming a defined space to accentuate displacement and uniformity; then he was commanding everyone’s attention from the top of a ladder, shrinking the audience in size and individuality; then drowning himself in a janitor’s bucket, a painful action to watch; and seemingly snapping out, briefly, to smile at a small child in the audience.

While these elements combined to give the audience a very harsh-felt sense of anguish, physical exertion and displacement, Son somehow took it to yet another level when he started filling the janitor’s bucket with Aim toothpaste. As with the child before, he briefly changed tack by joking about how he “had to ‘aim’ it right,” playing off the toothpaste brand and giving the audience a brief respite from the intensity that had everyone stuck fast, petrified and fascinated, to their spots. Such breaks from the show were fascinating – they highlighted that the person inside the ritual monotony of an army was not, indeed, lost; although they were very much in pain. But then his head was in the bucket again, blinding him before pouring the mess over the large front window of the Gallery while he teetered from the ladder.

Demanding that particular members from the audience come up to the window and draw in the toothpaste, Son forced the select few out of their conformity, encountering another on-going motif of his work that references his only artistic expression while in the military; he used to clean the bathroom floor every day using toothpaste, and would indulge himself by drawing with it.

My friend was still shaken for hours after the performance, feeling a grief and anguish throughout that she just couldn’t rid herself of. Son was even worse off. By the end his voice was almost destroyed and he seemed to have caught a sudden flu. He was utterly worn down, but back to his cheerful self that everyone loves.

It is not often that a writer can honestly say they have seen art that changes how they see the world. It is therefore a privilege for me to assert that point now. Samin Son is a remarkable talent quite unlike anyone else you will ever see.
This article first appeared in Issue 6, 2014.
Posted 7:01pm Sunday 30th March 2014 by Zane Pocock.