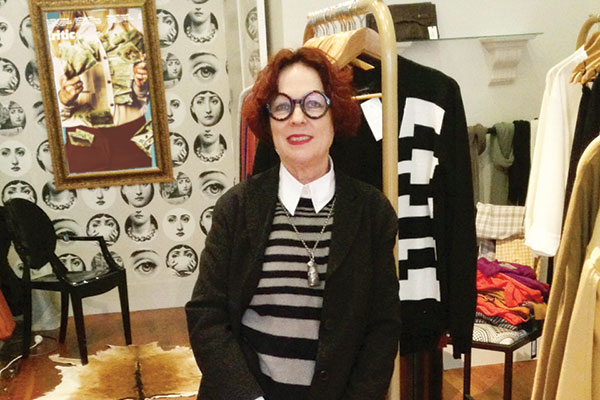 Owner and Designer at Dada

I’ve realised, in the midst of my daily routines, that there seems to be this generalised idea that art and fashion coexist, and it has left me wondering – with fashion becoming the focus of an increasing number of exhibitions and shows (i.e. iD Fashion Week), is the distinct line that once separated fashion and art becoming completely blurred? A handful of notable designers throughout history have stated unequivocally that fashion is art but in contemporary culture, the topic continues to be debated and designers, as well as art and fashion historians, remain divided.

The other day I went into Dada, the small boutique store directly beneath my apartment, and talked to Marie Strauss – owner, designer, curator, world traveller, and fellow art enthusiast, for at least an hour. Really, all we needed was coffee and cake. Strauss started the Dada Vintage label in 2008 when she also opened the Dada boutique store on Moray Place. In a completely non-ostentatious location, Dada is squeezed in between Mint Gallery and the Moray Place florist. Marie’s personal taste is reflected in both the store – which is filled exclusively with racks of very well designed and made clothing – and in the front window, which artfully displays hand made popcorn sculptures, painted ceramic cat figures, dada-doll mannequins draped in vibrantly patterned silk fabrics and Kate Sylvester cashmere cardigans.

Typically dressed in a Christian La Croix-esque outfit (red nails, costume jewellery and shiny shoes), with Vivienne Westwood-chic (but short) hair, Marie stands alone behind her small counter top, which is elaborately decorated with numerous piles of jewellery, books and fabric swatches. Her presence alone totally adds to the already distinctively quirky, but still à la mode, aesthetic. The store, and Marie’s own designs are eclectic, colourful and theatrical, but remain understated, edgy and, above all, tasteful and refined. Holding a degree in drama, two master's degrees in fine arts, a postgraduate diploma in costume design and an honours degree in ceramics, Marie’s artistic flare and extensive knowledge of the arts and fashion is clearly manifested in her store, and her designs, which seamlessly display a sound knowledge and profound understanding of style and quality combined with influences drawn from classic couture, contemporary art and architecture, as well as the European avant-garde and Dada period.

In case you’re confused about the term “Dada” and its overall significance, Dada is the name given to an art movement that started in Germany in the 1920’s. The movement primarily involved visual arts, literature, poetry, art manifestos, art theory, theatre, and design, and concentrated anti-war politics through a rejection of the prevailing standards in art, through anti-art works. In addition to being anti-war, Dada was also anti-bourgeois and had political affinities with the radical left. Hannah Hoch, the pioneering female Dadaist, sardonically critiqued the mass culture beauty industry of the time in her work, and equated women's liberation with social and political revolution. Dada laid the foundation for abstract art, a starting point for performance art, and a prelude to postmodernism; it was an influence on pop art, a celebration of anti-art, and the movement that opened the door for Surrealism.

With iD Fashion Week fast approaching, I caught up with Marie for a fascinating conversation.

Hi, Marie. I’m so pleased to get a chance to talk to you! This store is so great. How long have you been here for?
For about seven years or so! I used to teach at the art school, but I have had numerous businesses. I had a furniture design store, interior decorating, and then a t-shirt design business called Strousse. I was also in partnership with a graphic designer once. He was really great.

Did you name and decorate the store yourself? I love the window display!
Dada is obviously named after the movement. The Dada dolls in the window are taken from the Dada period. Hannah Hoch is a really big inspiration of mine as well. Dada apparently means “hobby horse,” so I have a carousel horse behind the counter there. Well, it’s a framed photograph of one. The store is really personal for me, it’s like a studio; I can exhibit whatever I want here. Art, pots. Anything. It allows for me to be very inventive.

Tell me a little about yourself. Where are you from? What's your educational background? What are your general professional and non-professional interests?
I completed a BA in drama and costume design in South Africa, then an MFA in Johannesburg, and then I did ceramics in my honours year before getting my second MFA. I consider myself to be a maker, though – not an artist or designer, or anything my qualifications say I am. I just make things. I started the business with someone else and it was a disaster. I’m too opinionated to work with anyone. I have a friend who is a designer, she lives in Auckland and she’s the only person I could work with because our taste is the same. The shop is the manifestation of my own vision and it’s precious to me. It’s my aesthetic. What I choose from other designers has to match my own designs and my own taste. It’s very personally invested.

Who are some of your favourite designers? Artists?
My favourite Italian label is Marnie and, of course, Prada; Walter van Beirendonck, older designers as well – Balenciaga, Valentino. The best designers’ clothes are always wearable.

With fashion becoming the focus of an increasing number of museum exhibitions and a multitude of artists now collaborating with high end/designer labels, the distinct line that once separated fashion and art is more blurred. What is your view on the coexistence of fashion and art?
I think it should be a very clear line otherwise it becomes de-crafting. Fashion exists in the same way Pollock’s paintings do – it’s the craft of it. Fashion is not fine art; fine art is the influence of fashion. Clothing on a catwalk is an occasion for display. It’s very theatrical, but that doesn’t make it art, or the clothes art, because with fashion, nothing is new, it’s all regenerated and in a framework that is relevant to the time. I just find it astonishing in fashion that people blur the line between fashion and art. Just because fashion is fleeting and art is forever, it doesn’t mean that fashion has to be less, or has to be defined by existing as art. It is its own thing. Fashion is just superficial fun; it feeds an ego – it’s about presentation of the self. In saying that, however, you are what you wear, but in a lot of ways you aren’t what you design. If you hang art on your walls people will judge you by that, whereas with fashion, it’s changing every day, and you can throw it away if you don’t like it.

What do you think makes a quality article of clothing?
Only three things: fabric, design, and craftsmanship. Beautiful fabric, which is beautifully designed and beautifully made, is all one needs. Good quality clothing just hangs better, looks better and is better. There’s this odd confusion where people buy things that cost less thinking that it’s the same. You can buy a look for very little, but you can’t buy quality. And quality is made to last – like the lifetime of a classic silhouette.

Why don’t people appreciate the detail, design and quality of high-end fashion?
They have no expectation of it, so they don’t look for it.

I agree. Can you describe the general process you go through to design and realise a piece of clothing?
A lot of clothing brands want to make multiples of things so you have to go to production, but I only want to make clothing for myself, and my own store. I prefer exclusivity. I just design my own clothes and make them, then sell them.

How would you define Dunedin’s fashion?
Because I look for my fashion elsewhere, and I’m not from Dunedin, I was never influenced by Dunedin fashion, so I am relatively unfamiliar. But that’s not saying I don’t think it’s important, I just have no knowledge of it. The only time I ever see Dunedin designer’s clothing is in iD. I know Dunedin is seen as a fashion hub; I just don’t keep up with it. My influences are European art and architecture and fashion – I live on a farm, I’m not socially involved. Fashion for me is like painting, or making a meal or creating a pot – to me it’s all the same. My taste is eclectic – I collaborate with people who want to make things happen because they find it exciting, not to follow some current trend. It’s not a sound business attitude, but at the end of the day I’d rather do this than not. A lot of people want to be something or be defined by what they do or create and I just don’t think it’s important.

Let’s talk about iD. How long have you been involved with iD for?
This is my fifth year at iD, and the third year that I am doing the 15-year collection. It’s the same size as Plume and my disorganisation is quite overwhelming!

What’s it like preparing for such a big show – especially this year, because of the anniversary – can you explain the process?
I treat it like a project or a proposal. I get my ideas in book form with swatches and drawings and photos and I work from what seems to be a storyline. It makes sense for me to do it like that, a lot of designers do. It also forces me to get things made for the season. It’s a pity there’s no iD before summer.

Where did you draw your inspiration for the iD collection?
Well, the theme is taking a dog for a walk in France. It sounds very banal but the way the French dress when they take their dogs for walks is fabulous. The coats they wear, the forms of those coats are so beautiful. There is a real emphasis on looking respectable and the small detail of things is inspiring. The way bread is wrapped perfectly and the feel of beautiful fabric is inspiring. What makes life refined is inspiring. Lining is the right lining. The joy is in the small things. I also love the French 18th Century. I love Milan, I love it a lot and I know it quite well. I go to Europe twice a year and when I’m in Milan I go for walks in the morning before the sun comes up and the light falling on the churches is unforgettable. French culture really is the pinnacle of high culture. Garnier is wonderful, too. There’s a French saying, “To dress badly is offensive to other people …”

How did you transfer your inspirations into your designs?
This year’s collection, as I said, is inspired by form, colour and patterns, with a mix of fabric, textile and fur to strengthen the silhouette. It is all about energy and light-hearted fun, form, theatre and humour and it comprises mainly of one-off pieces.

I look forward to seeing the show and your collection! Thank you for talking to me, Marie; it’s been inspiring, interesting, and fun. And I want to buy one of those popcorn sculptures, so let’s exchange emails.

With that, we exchanged email addresses, and I left the store. While a definitive answer to my initial question may not have been answered, the tug of war between fashion and art will certainly persist. Perhaps it’s just best to think of art and fashion as having a symbiotic relationship as two different entities that feed off of one another.
This article first appeared in Issue 5, 2014.
Posted 5:30pm Sunday 23rd March 2014 by Hannah Collier.