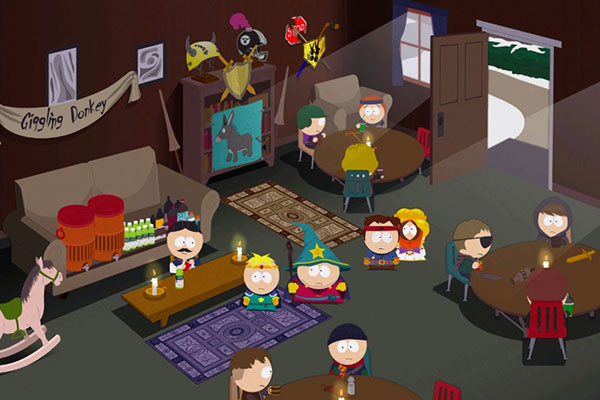 Whatever you think of South Park, there is no denying that Matt Stone and Trey Parker, the creators, minds and voices behind the show, are geniuses. They created South Park 18 years ago in each other’s basements with craft paper. The show has gone on to become an undisputable cultural icon and has only become better with age. They have narrowed the process of making the show down to a fine art, taking only six days between starting an episode and airing it. You may think that the humour can be lowbrow, and I am certainly not disputing that, but for every fart joke there are always 20 insightful and thought-provoking jokes about the world we live in and what is happening in it at the time. Despite the success of South Park the show, as a franchise, it has always been lacking. Several attempts at making a video game have all been less than favourable, ranging from abysmal (South Park, 1998) to very average (South Park: Let’s go Tower Defense Play!). The latest South Park game, however, South Park: Stick of Truth, has finally revealed what these games have been missing all this time: the glorious minds of Matt Stone and Trey Parker.

South Park: Stick of Truth has been conceived, written and voiced by Stone and Parker, and it absolutely shows. This game is undeniably one of, if not the, funniest games ever made. You could refute this statement with as many titles as you like, but I guarantee that none of them will have you laughing so hard that you have to put the controller down like this game does.

The writing is truly what makes this game special. You are a new boy who has just moved into town as all of the young boys of South Park are in the middle of a massive Live-action, Fantasy Role-playing game as two warring factions; the humans being led by Cartman and the Elves led by Kyle. The journey that follows this titillating premise is like none I have ever taken in any medium. Every time I was sure that it couldn’t get any more outrageous it blows down a whole new barrier. There were moments in this game that I still can’t believe happened to me. I never thought that I would play as a shrunken down version of myself, chasing magical gnomes through the entwined bodies of my parents banging each other, the real challenge being trying not to get struck by my mother’s swinging boobs or by dad’s dangling nutsack. These guys get that mediums such as cartoons and video games are literally without limits – if you can think it, you can do it. This is an idea that wins out time and time again in this game. The writing is absolutely just as brilliant as the show’s and, in some cases, it’s even cleverer. In particular, the self-aware nature of the game is inspired. Characters often reference aspects of the game, either tying them into the role-playing game the kids are playing or just outright pointing out that you are playing a video game. This gives Stone and Parker a platform to make fun of aspects of games that we love, but that are really nonsensical, such as battle mechanics.

Though the game makes fun of them, the mechanics of this game are just as good as the writing. The game was developed by veteran studio Obsidian, the team responsible for games such as Knights of the Old Republic 2 and Fallout: New Vegas. The gameplay is a mixture of classic JRPG turn-based combat and paper-Mario styled timed attacks and defenses. The combat and exploration systems work excellently, but it is the loot and customisation that really makes the gameplay special. The world is absolutely full to the brim of lootable items, each of them a specific reference to jokes and tropes from the 17 seasons of South Park. However, it is subtle enough to be excellent fan service, while also not being alienating to those who don’t religiously watch the show. Obsidian did an excellent job of bringing the town of South Park to life. The game looks absolutely amazing. If somebody walked through the room and saw you playing they would be sure that you were watching an episode of South Park.

South Park: Stick of Truth has set a new standard for licensed and comedy video games. They have proven not only that a franchised game can be as good as its source material, but also that there are avenues available through other mediums that can expand that material further than ever before.
This article first appeared in Issue 5, 2014.
Posted 5:30pm Sunday 23rd March 2014 by Baz Macdonald.