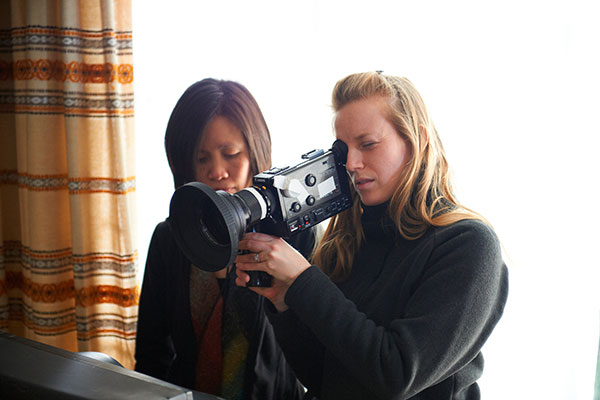 Stories We Tell is a documentary directed by Sarah Polley that chronicles the relationship of her parents, Michael and Diane Polley, with special attention paid to an extramarital affair of her mother’s that resulted in Sarah’s illegitimate birth.

While technically a documentary, Stories We Tell is littered with recreations of Michael and Diane’s life together (all shot on Super 8 cameras so as to give the impression of home videos) and voiceovers of Michael Polley reading from his memoir. While the Super 8 segments were wonderfully shot and tricked me into thinking they were genuine home-movies, Michael Polley’s narration felt uncomfortable. Being one of the subjects of the film, it was odd to hear him speak in first-person about events that had just been documented moments before and drew me out of my immersion in the film. This was exacerbated by the inclusion of shots of Michael recording his dialogue in the studio whilst receiving direction from Sarah, the director.

At just under two hours, Stories We Tell is rather long for a documentary and makes me think that Sarah Polley had done a Peter Jackson and gotten too attached to the project, leaving her unable to bring it to a suitable conclusion. I spent the last 20 minutes of the film wishing it would end, and there were several instances when the story had reached an apex and the screen would fade to black … only for Polley to follow a story that ultimately detracted from the film as a whole. Much of the final 20 minutes focuses on Sarah’s own involvement in the story; her reaction upon meeting her biological father and her efforts to turn her story into the documentary. Unfortunately it disrupts the flow of the film and causes the audience to once again feel jolted out of the narrative. There were countless scenes of Sarah setting up lights, or reading out emails from her biological father, which would have been better suited to “behind the scenes” footage, rather than the closing minutes of a documentary.

Stories We Tell is an emotionally gripping documentary exploring the secrets behind every family through the experiences of one. However, it is let down by awkward and unnecessary sequences that left the film stylistically uncertain; was it gonzo or was it journalism? Stories We Tell is certainly moving but nothing you will regret not seeing.
This article first appeared in Issue 5, 2014.
Posted 5:30pm Sunday 23rd March 2014 by Nick Ainge-Roy.