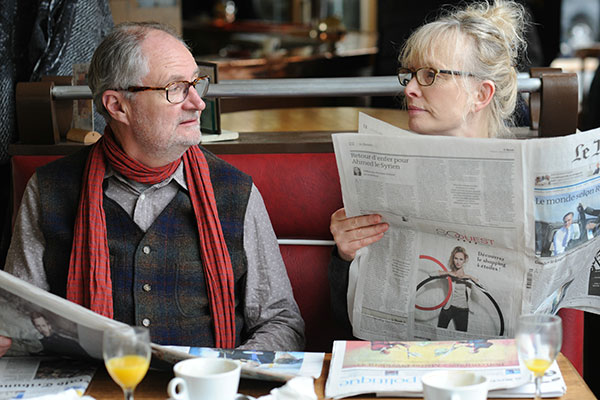 Le Weekend is about an aging couple, Nick and Meg, played by Jim Broadbent and Lindsay Duncan, taking a long-overdue second honeymoon to Paris, trying to recreate a time in their lives when they were happy, in love, and blissfully unconcerned with the future. The cast are absolutely superb, and I can’t recommend this film highly enough. The makeup, hair, cinematography design, and even the very dull names Nick and Meg, all show us the plain-ness of both these characters. We see them with all their blemishes, and that makes them real, and goddamn beautiful, to the point that even the old-people sex scenes were charming. Jeff Goldblum, too, apparently defying the tyranny of time, has never been more alluring.

The entire film, like life, is a contradiction. The opening scene, their train emerging from the dark channel tunnel from London to Paris, surely symbolises a rebirth. But by the end, this theme has hardly been mentioned. Instead, this film shows us that people can never really escape themselves. Nick and Meg take their entire past with them; happiness and grievances, and spend their weekend in Paris first complaining about and then celebrating their plain life at home in Birmingham. Meg makes a half-hearted attempt to spend a lot of money seeing the sights of Paris, because “when in Rome,” but ultimately can’t avoid herself or her husband. Both of these people have needs, but neither really wants to satisfy the other’s at the expense of their own. We see the real nitty gritty; the incredible contradiction of totally compassionate love, totally malicious hate, and totally self-devoid dependency, all existing at the same time. This relationship was so real to me that during certain scenes, quite simply, I wanted to weep.

The beauty of this film is its grounded performances and its intelligent script. The trailer suggests it is a mere rom-com for oldies, but to me, Le Weekend is more akin to and rates much higher than the Before Sunrise trilogy.
This article first appeared in Issue 5, 2014.
Posted 5:30pm Sunday 23rd March 2014 by Andrew Kwiatkowski.