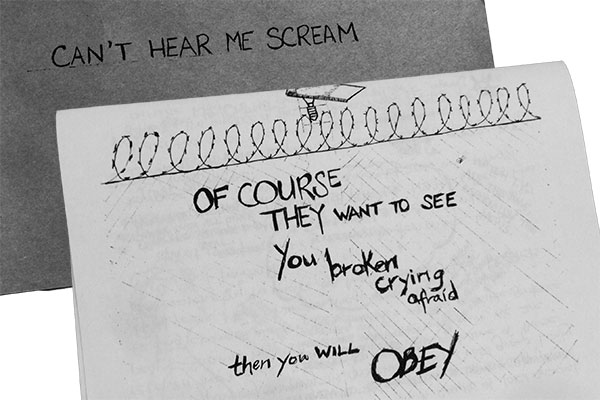 Zine of the Week

By Valerie Morse
15 A5 Pages - Cartoons and Text

Can’t Hear Me Scream holds a special place in New Zealand for anarchist-inspired librarians and would-be activists, so it seems a fitting place to start this column. While there are wonderful zines of celebration, some are like a stiff drink of humanity.

For a start, this zine was created in Arohata Women’s Prison. When Valerie created it she had been arrested on arms charges and was described as a terrorist in the news media as part of the “Urewera 16” in 2008. In the zine, Valerie details her life in prison, prison bureaucracy, and the arbitrary use of power. All of the charges against Valerie were later dropped.

The raids are now widely recognised as driven by paranoia and greatly excessive, particularly for scooping up a community librarian and activist like Valerie. Cold comfort for her and others involved after being labeled terrorists, I am sure.

When I read the zine it was like a thump to the chest. It is tempting to try and laugh it off as “legit” and earning “street cred” but it is just way too real and all too human. Read the zine. Make up your own mind, but something is missing if you don’t feel something.

Zines of the week are chosen by volunteers at Blackstar Books, Dunedin’s own anarchist-inspired community library and social space since 2003, located on Moray Place near the Octagon. Come by sometime – details and directions are available at cargocollective.com/zinefest
This article first appeared in Issue 5, 2014.
Posted 5:30pm Sunday 23rd March 2014 by Staff Reporter.