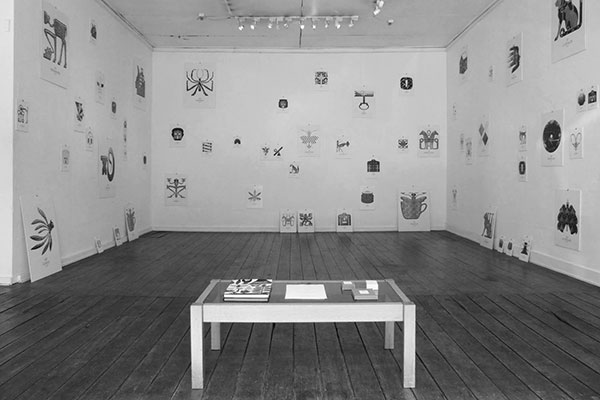 Since the start of the month, the Brett McDowell Gallery on Dowling Street has exhibited the latest in an on going series of digital archival reproductions from Richard Killeen. Killeen is perhaps one of the country’s foremost modernist artists, shooting to fame in the ‘70s for his iconic cut outs that allowed any individual hanging them to play the part of curator. Collections of cut outs came with no instructions as to how each individual piece should play off the others, and as such they are some of the most dynamic artworks from the period.

In this exhibition, we can see a similarly brilliant inconsistency coming out of such a lack of direction. Although each individual reproduction is in itself a single piece this time round, the installation of the exhibition as a whole gives the gallerist a similar curatorial role to the collector of the ‘70s. It is a further exploration of an idea already presented at Peter McLeavey in Wellington in 2012, and Ivan Anthony last year in Auckland; as such, we can observe the different curatorial styles of each gallerist. While both of the past two variations were rather formulaic in their presentation – Ivan Anthony’s was quite simply a grid, and Peter McLeavey’s departed only slightly from this – Brett McDowell’s installation harkens back much more directly to the apparent randomness often exhibited by Killeen’s early “curators.” It is messy and exciting, with pieces not only jumping around in location but also in size.

As for the reproductions themselves, they evoke a reaction both enthusiastic and critical. On the one hand, the collection could seem like it’s simply McDowell’s turn to host the great touring money-maker of Killeen’s reproductions, with important dealer galleries in three of New Zealand’s major art centres all exhibiting a variation of the same idea. And with a seemingly endless library of designs that Killeen could print off at will to pay his rent, it’s easy to write the exhibition off as a sell-out.

However, in being highly self-referential and combining key aspects of various periods in Killeen’s career, the pieces are an iconic, self-curated collection in themselves. They not only bring to mind his cut outs of the ‘70s but also his obsessions with taxonomy and patterning. The printing of titles onto the pieces themselves not only accentuates the taxonomic theme but also jumps in to stop the viewer from dwelling too much on distorted meanings – abruptly reminding the viewer that Killeen has decided, in textbook fashion, exactly what each piece is and what it represents. It thus opens a dialogue about the importance of viewer projection and their relationships with the meaning of malleable art works, while also critiquing the desire of artists to categorise and simplify the world at large.

A further aspect not to discount is that while this artist has been around for decades, here he finds himself playing with phenomena only made possible through digital mediums. He is now very much a digital artist, never one to find himself stuck behind the times. The images themselves are computer-generated, yet still characteristically taxonomic. They must come from a futuristic imagination that sees human culture moving steadily back in time while digital technologies continue to be prevalent.

Now, it’s not often that the cost of artworks comes into an exhibition review. However, priced as reasonably as they are, these pieces represent an ideal opportunity for new collectors to dip their toes in the water with a piece that, if you read enough, has almost endless historical and conceptual frameworks to discuss with a visitor or ponder on your own. They are entry-level original art works by a hugely important figure in New Zealand’s short art history, a fact that must surely have been recognised both by the artist and gallerist as an interesting dynamic to foster.