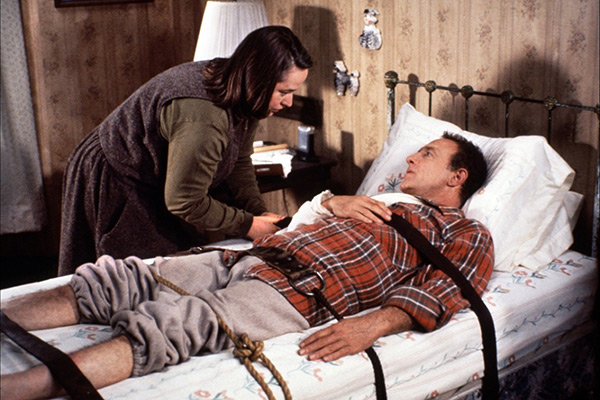 Despite having over 30 of his novels adapted for the big screen, only one Stephen King movie has ever won an Oscar, and that is Misery. Misery invites the audience into the home and mind of perhaps King’s most perplexing creation: Annie Wilkes. Annie is a clean-living, conservative nurse, whose wholesome lifestyle only allows for one simple passion: the Misery Chastain book series.

So imagine Annie’s absolute glee when by a freak twist of fate the series’ author Paul Sheldon crashes his car on the outskirts of her home. With two broken legs, no personal phone and a blizzard raging outside, Paul is forced to stay in the middle of nowhere, to be nursed in the home of his supposed “number one fan.” But there’s a problem: Annie has just completed the final book in the Misery series to discover that the title character, her life hero, has been killed off once and for all. Distraught and outraged, her sanity slowly begins to unravel as she punishes Paul for what he has done, and imprisons him in her home until he re-writes the ending.

The “small town religo harbouring psychotic feelings and blood thirst” is certainly a common character type, but is brought to the next level by Kathy Bates’ absolutely stellar performance. Bates’ Annie is equal parts sickly sweet, unintentionally hilarious and balls-shrinkingly scary. It’s a testament to her performance that she could make a polite, plump, middle-aged nurse be voted the 17th most terrifying villain of the last 100 years by the American Film Institute.

Misery does contain some suitably unpleasant violence (you think Annie’s threats are empty, until you discover they’re not) but the beauty of the film comes in the moments of psychological thriller. Nothing makes you squirm more than watching Annie shaving Paul’s face, slowly and intensely confiding in him the deep personal level on which she connects to his work. Naturally, Bates won the Oscar for that year and Annie’s phrase “you dirty bird” became the funniest insult to come out of 1990. Get amongst it – every self-respecting Civic Video will have numerous copies.
This article first appeared in Issue 4, 2014.
Posted 2:59pm Sunday 16th March 2014 by Rosie Howells.