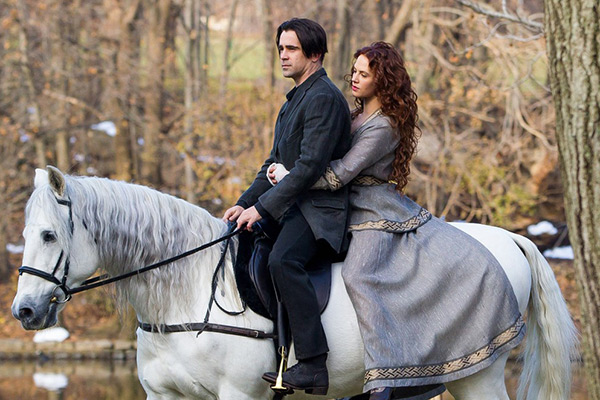 I have limited space for this review, so I’ll just go ahead and start my list of “A Thousand Things Wrong with Winter’s Tale,” and we’ll see how far we get. Big number one: cast. Colin Farrell couldn’t sell the main character, a thief named Peter Lake, for a moment. With only his two trademarked facial expressions to peddle in every scene he appears (the “Puckered-Brows” and then the “Getting Teary”), he is less the expressive Zoolander and more the proverbial plank. Russell Crowe, too, transparently did not believe he was a demon of the underworld and/or an Irish gangster, and neither did I. The females in the cast were utterly forgettable as they had meagre relevance to what passed for plot. Oh, yeah, the plot is that Peter Lake is pursued by a demon while trying to pursue true love.

The story arc was trivial to the point of absurdity, and told clumsily. Every time things look dire for Peter Lake, SUDDENLY A GIANT GUARDIAN ANGEL FLYING HORSE APPEARS AND SAVES EVERYBODY, and thus the emotional stakes were zero. The director also relied on the dialogue to do all of the work, and to make it clear why the story had taken the latest contrived turn, frequently characters would walk into shot, go on a giant one-sided spiel about their entire life story, and then finish by explaining what they were doing in that exact moment. Wow, that’s bold. Like, Tommy Wiseau bold.

The love story of Peter Lake and “The Red-Headed Girl” barely pays off. Because of her weakness from tuberculosis, she could die if they ever hooked up, and it was plainly moralising at us (read: YOUR WICKED LUST WILL BRING RUIN). This love story makes Twilight look like fucking Titanic. So in summary, Winter’s Tale was the most pointless two hours I ever spent staring at a screen, and that’s including the time my friends and I stayed up until 3am watching a fake-fireplace video on YouTube.