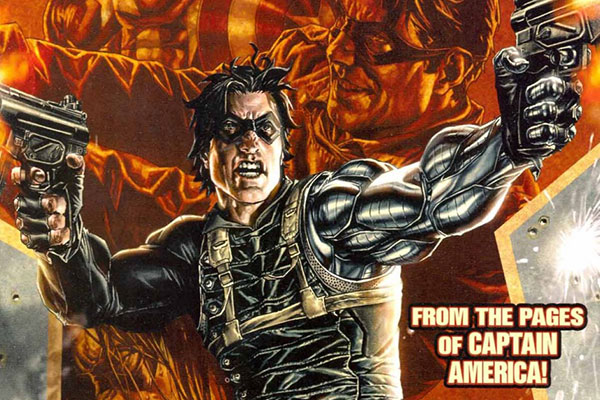 Ed Brubaker’s first two comic book-arcs of Captain America tell the story of the Winter Soldier, a Soviet assassin and super-spy tied to Steve Rogers’ past. Published in 2006, this book was the subject of much controversy, as it became clear within a few issues that there was a very real possibility of Bucky, Captain America’s iconic sidekick, being brought back from the dead. That’s over fifty years of meaningful, sacrificial death, which would break the golden comic book adage “only Bucky and Uncle Ben stay dead.” Sullying the memory of the American boy hero would have earned Brubaker a great deal of fan boy-hate ... if this weren’t such an expertly crafted story in nearly every way. It breaks free of the “cape comic” status quo by telling a consistently gripping tale of espionage, mystery (murder mystery, even), responsibility and friendship.

The initial threat to Captain America is Cap’s archenemy, the Nazi Red Skull. In an attempt to create a weapon of mass destruction (a “cosmic cube” or Tesseract, as you might know it from the Avengers), he must kill thousands of innocents. This sounds straightforward enough, but Brubaker creates a real aura of menace about the Skull, and with artist Steve Epting they make him scary and downright creepier than the villain has been in years. When intelligence informs Cap that the mythic Winter Soldier from the Cold War assassinated the Red Skull, he goes looking for the assassin. Captain America finds him, and sees a young man who appears to be a slightly older version of James “Bucky” Barnes, his World War II sidekick. Cap is understandably distraught and believes that somebody is playing mind games with him.

Brubaker’s ability to tell both a personal and epic story at the same time is what makes it so engrossing and entertaining. Captain America fights to protect innocents against acts of terrorism, while his alter ego Steve Rogers struggles against his burden as an icon of freedom and the idea of Bucky as a murderer. This America-centric story seems enough to make us in the rest of the world turn away in indifference, but Steve turning his back on his government and fighting for more moral reasons instead gives everyone something to root for. As his partner Sharon Carter suggests, Captain America is at his best when he fights for what’s right, not for what he’s told. He’s a man of freedom and morals, he’s susceptible to sadness and rage, but he’s a human and this is a story of humanity and self-identity above all else.

Although the narrative steals the show, the art is absolutely gorgeous. A guest artist will crop up here and there, but most of the credit goes to Steve Epting. He manages to give the book an ominous dark feel, while never feeling monotonous or depressing. His style is grounded in a gritty realism that lends itself well to the human narrative style and gives the action sequences a fierce, fluid energy, and dramatic lighting in more sombre scenes.

This book is extremely accessible, and clearly written to be easily consumed by those new to comics, and not bogged down by lore. It offers a solid introduction to the Marvel world, especially for those wanting to learn more about where the film Winter Soldier (which is coming out in theatres on 3 April) came from and who those characters are. And for those who fell in love with this story as hard and fast as I did, Brubaker went on to write another whopping 7 years of Captain America stories for Marvel, which never stop being entertaining and refreshingly thoughtful.