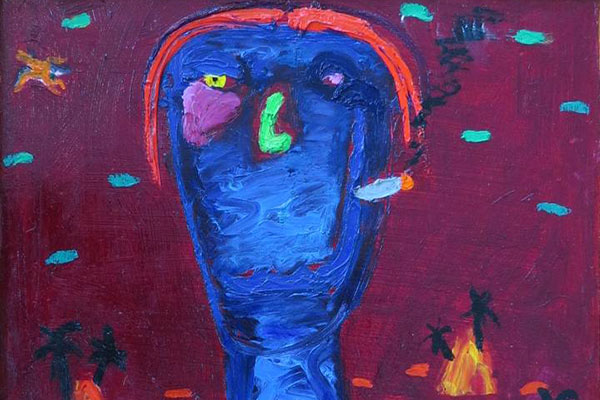 “I am an Expressionist painter. I rarely plan a painting or do preparatory drawing. I commence the work with a quick wash of strong, primary colour and then begin to hurriedly paint figures of people, animals and hybrid creatures. I add crude marks for volcanoes, hills, sea, buildings, boats, clouds, sun and moon, working with vibrant impasto. The painting forms, and informs me as to what it is. The last stroke is always the title. Above all I prize spontaneity, colour and a good dose of irony. I love being a painter.” - Ewan McDougall

Ewan McDougall is a Wellington-born artist who is based in Dunedin. He was educated in Oamaru, where the North Otago painter Colin Wheeler taught him painting. From there, Ewan attended the University of Otago, gaining an honours degree in Political Studies in 1971, before working as a junior lecturer and tutor at the University. After his time at the University, like most other “artists,” he took some time off to travel and to experience. During the 1980s he travelled extensively, working numerous jobs here and there at pubs, fast food places, mines and on oil rigs (so bohemian), before finally moving home to New Zealand with his partner, Sarah McDougall. In 1988, he was referred to Queen Mary Hospital in Hamner Springs for treatment for addiction, a time that subsequently provided much inspiration for his earlier, and later, work. He began painting during his rehabilitation and developed a dynamic personal style using thick, richly pigmented oil colours, inhabited by personal references to his outrageous and somewhat volatile lifestyle; a style that continued on into his later work, as displayed in Pearler.

McDougall has been painting full time since 1988 and has had 64 solo exhibitions in New Zealand regional galleries, dealer galleries and numerous group exhibitions – as well as exhibiting internationally. He is a figurative neo-expressionist, and using various brushes, knives, and his fingers in his studio, he creates works of wild excess, vigour and ecstasy with oils that are scraped, squeezed and splattered on to canvas, manifesting images of the memories that permeate his mind. There is a certain element of warmth in his passive-aggressive spontaneity that remains unforgettable, and above all there is a delicate sense of honesty, reflection and self-deprecating humour present in all of his works.

Pearler, an exhibition and book of paintings and poems which celebrate the 30-year wedding anniversary – the Pearl Anniversary – of Ewan and Sarah McDougall and their creative life together; they collaborate to recount their past 30 years together. The exhibition and limited edition book is composed of seven poems to which Ewan has responded in paint, followed by eight of Ewan’s paintings, to which Sarah has responded with poems. Paintings with titles like “Happiness Junky” and “Bad Mona Lisa,” which feature childlike figures floating in empty spaces of vibrant colour, encapsulate the wild freedom that exists in their shared intimacy. McDougall states in his introduction to the book, “many of the themes and paintings owe a great deal to the fun, frivolity, chaos and pain of the past, as well as what I think of as the redemption. I am now free of mind-altering substances and today my mind is free to alter the world.”