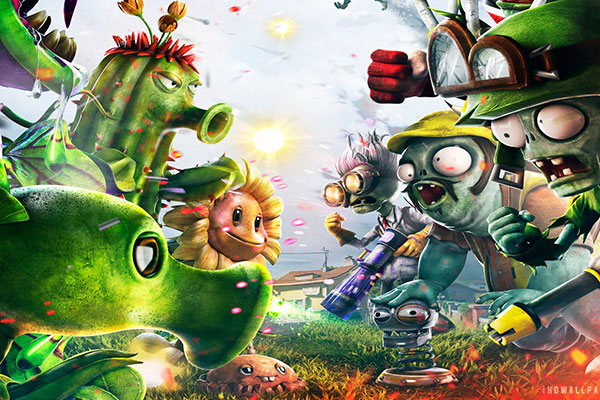 Developed by Popcap Games, Published by EA | PC, 360, Xbox One

Often it is not until we are presented with something radically new in tone that we realise how similar everything else feels. Over the last generation we had access to a vast library of games, but I wonder if one was to sit down and categorically analyse many of these games in terms of tone, gameplay, story and mechanics, how many different categories one would end up with? My guess would be not as many as we would like.

However, this is no reason to give up hope, because there are always studios like Popcap to come to the rescue. Popcap Games, creators of Bejewelled, Peggle and Plants vs. Zombies, has made a very successful career off manipulating this very problem. Many of their games incorporate overused tropes, mechanics and ideas in fresh and innovative ways that remind gamers of their desire for innovation itself.

Popcaps’s newest game Plants vs. Zombies: Garden Warfare is their best example of this, and certainly the biggest risk they have ever taken. As you may know, Popcap’s games thus far have fallen into the category of casual games with variations of puzzle, skill and tower defence genres. In many gamers’ eyes their games are respectable, but not beloved of the “hardcore gamer.” But with Garden Warfare they step valiantly into the hardcore arena by bringing their beloved tower defence series into the world of online multiplayer shooters.

Garden Warfare is both a competitive and co-operative online third person shooter. I’m sure there are many of you that never expected to see this genre sitting behind a Plants vs. Zombies title, and I can’t blame anyone for being sceptical of how successful this experience could be. But trust me, it’s fucking awesome.

The primary competitive mode is your classic team death match, titled “team vanquish.” This game mode sees 12 Plants facing off against 12 Zombies; the first to 50 vanquishes wins. Each team has four classes (the Plants, for example, have the Peashooter, the Sunflower, the Chomper and the Cactus). Each class offers a diversely different approach to combat. The Peashooter, for example, is your classic offensive shooter, while the Cactus acts as your “sniper” of sorts. Though the Zombies’ classes are variations of the Plants’, their approach to the classes is often very different. For example, the equivalent of the Plants’ Cactus sniper on the Zombies side is the All Star - a football-themed zombie who fires a barrage of far reaching, weaker projectiles instead of the Cactus’ slow firing, but powerful, spines. Each class feels completely different to play and has a set of tactics that make it particularly effective. With such a diverse set of ways to play, Popcap has done an exceptional job of making sure that no class is overpowered.

The game also includes a game-type similar to Dominion called Graves and Gardens. This mode sees either the Plants or the Zombies working their way through a series of objectives that they must capture, while the other team must try and defend these objectives long enough to run out the clock. The best part of this mode is that if the offensive team manages to capture enough objectives, the round finishes with a final event – such as the Zombies trying to deactivate a “cuke,” a Plant-variation of a nuke made out of a giant cucumber.

The final game-type is the co-operative mode in which four Plants must protect their garden against waves of Zombies, using their offensive abilities as well as potted plants to defend. These pot plants are part of the most addictive part of Garden Warfare. For every round you play in any game mode, you are rewarded with coins for skill and participation. These coins can be spent on blind packs, which include the aforementioned pot plants, costumes, upgrades and whole new variations of classes.

The costumes are a gleeful mix of adorable and hilarious. Often the sting of being killed is dampened by the hilarious image of the Plant or Zombie that killed you adorned with ridiculous moustaches and hats.

The upgrades and class variations add an even deeper level of difficulty to the competitive battles. However, for players unwilling to play with hard-core gamers armed to the teeth, there are game type variations that don’t allow upgrades.

The biggest criticism that can be made against Garden Warfare is the limited number of game modes and maps. However, the game does have a price tag of half what any other competitive shooter on the market has and the awesome mechanics and huge variety of unlockables means that every match is a joy despite the repetition of maps and ways to play. In the end, the smile this game puts on your face is worth more than all of the Call of Duty series combined.