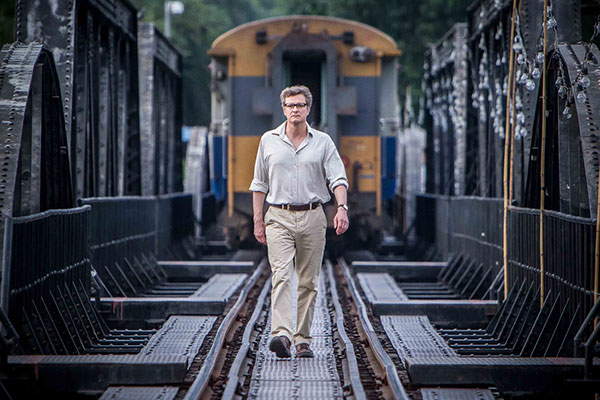 The Railway Man is a film adaptation of Eric Lomax’s memoir about the time he was in the British Army in Singapore when it was invaded in 1942. His company surrendered as prisoners of war, only to be tortured and dehumanised on the Burma railway construction effort. I was prepared for what was to come, perhaps more than others, after having read a similar book that claimed one man died for every sleeper laid on over 200 miles of railway. The film gives an accurate depiction of war through scenes of beatings and prolonged water boarding squarely in centre-frame. At the theatre, there were moviegoers squirming in their seats. The film makes you confront your feelings about water-boarding incredibly effectively, and obviously wants you to think about modern usages.

The film features big names like Nicole Kidman, Stellan Skarsgård and, of course, Colin “Aging Handsomely” Firth. I never thought I would say this about Firth, but his performance didn’t pull me in. I gazed at him in total awe in The King’s Speech; my heart broke with his in A Single Man; and he will always be the Mr Darcy of my imagination. But as Eric Lomax he was underwhelming, even at both the tragic and cathartic climaxes for his character. The real standout of the cast was Jeremy Irvine as the younger Lomax in the considerable amount of flashbacks, who is our main character in place of Firth.

It was an A+ story, yes, but here’s why the film earns only a C+ rating. First, it was terribly paced, and more screen time developing Firth, as older Lomax, was needed for our empathy. Second, the cinematography and sound design was totally derivative, and under-capitalised on the opportunity to represent the post-traumatic stress “haunting” Lomax. And, finally, while I’m sure his wife (does she have a name?) is a nuanced human being in real life, the film fails the Bechdel test hopelessly as Nicole Kidman is given no role beyond being merely the Sexy-While-Anxious-And-Helpless Woman, and that bothered me.