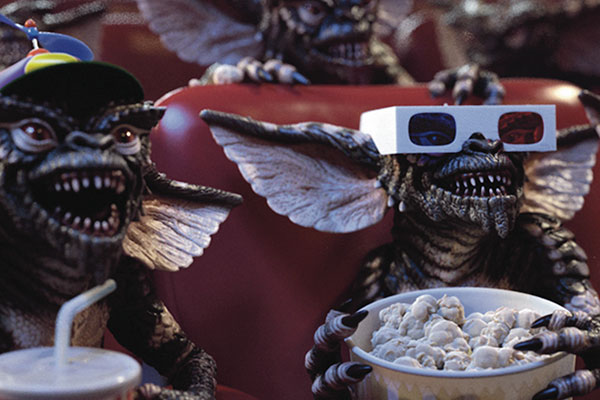 For many, Gremlins is but a distant memory; an 80s entertainment fog at the back of our minds, occasionally spurting out images of microwaves, Christmas trees and blood to our consciousness. You know you’ve seen it, but the details are hazy and the imagery vague. Let me refresh you. Gremlins was the best comedy/horror/Christmas film to come out of 1984, and penned by the king of dark children’s entertainment Christopher Columbus. Is that name familiar? It should be. Columbus is the writer/director responsible for such titles as Mrs Doubtfire, The Goonies, Home Alone, Fantastic Four, and the first two Harry Potter films. That’s right, Christopher Columbus IS your childhood.

Spurred on by such classics as the Addams Family and Young Frankenstein, Gremlins seamlessly combined horror and comedy to create one hilarious bloodbath. The story goes that all-round American dad, Randall, purchases a mogwai from Chinatown as a Christmas present for his son, Billy. Mogwai’s are just about the cutest things you’ll ever see: they are essentially a rabbit mixed with a troll mixed with pure sunshine. But there are conditions: don’t get a mogwai wet and never, ever feed it after midnight. Can you guess what Billy does? Both of those things. The original mogwai, Gizmo, spawns hundreds of distorted and evil reptilian creatures that rampage the picture-perfect town. There was action, there was romance, and there was awesome-cool puppetry reminiscent of E.T.

The comparisons to Spielberg don’t end there. Not only did Gremlins spawn a massive merchandising campaign, but it was criticised as being racist as well. The gremlins’ penchant for breakdancing, rap music, fried chicken and homicide was accused of reinforcing negative stereotypes of African Americans, who were understandably unhappy to be compared to reptilian anarchists. Racism is not unheard of in 80s children’s blockbusters (have you seen Raiders of the Lost Ark? OMG). But, nevertheless, Gremlins has to be taken with a grain of salt. Can’t be bothered with the whole film? Just look up “Billy Meets Gizmo” on YouTube and get your daily dose of cute.