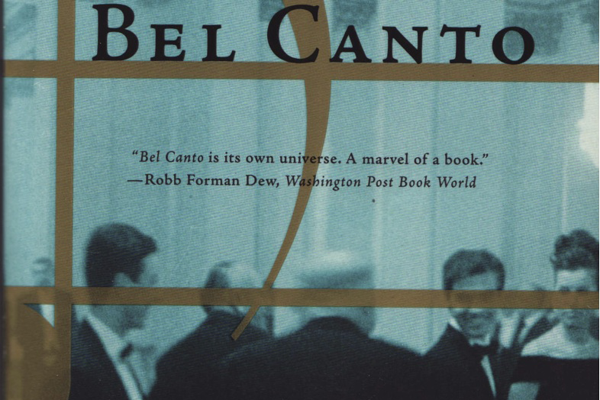 I missed my bus stop twice reading this book – which really is a fair indication of how hooked you get. Ann Patchett’s Bel Canto draws you in just as its heroine, soprano Roxanne Coss, captures her audience and the entire cast. Reading this novel, I was immediately reminded of E. L. Doctorow’s Ragtime in the way the prose is driven by music, both in subject matter and style. Here, it is opera that drives the narrative.

In an undefined Latin American country, Katsumi Hosokawa, head of an electrics company whom the country hopes will open business there, is thrown a birthday party starring famous opera singer, Roxanne Coss. Held in the vice presidents home, the guests enjoy the party only for it to be stormed mid-way through by a group of terrorists who plan to kidnap the country’s president. Only he hasn’t shown, opting to stay in and watch his favourite soap opera (an initially comic detail – which is just one of Patchett’s vices – that ends up being far more significant as the characters become equally hooked by the romantic screen).

Immediately derailed by their lack of a sure plan, the terrorists stumble into a hostage situation, creating a siege plagued with desperation and obscurity. The holdup – loosely based on the Japanese embassy hostage crisis in Lima, 1996 – becomes a story full of emotional weight and suspense. Patchett’s sensitivity and artistry renders the novel’s characters highly defined and believable. Throughout the book we are shown the brutality present in such horrific events, but also the humanity – most significantly, the extraordinary relationships that form between people in times of crisis.

The love affairs between two sets of characters are anticipated for pages within the narrative but eventually come to fruition naturally, though somewhat unexpectedly. Patchett conveys love with accuracy and warmth. When Gen, Hosokawa’s obedient translator, and Carmen, the girl soldier, meet in the cupboard each night, the power between them is so tangible you wish that their time together were infinite. It is certainly a romantic novel that wrenches your heart and has you captivated – while managing to possess wit at the same time.

Mainly though, Bel Canto is beautiful.

Patchett writes with grace; she captivates us with intermittent passages of intensity and smooth lulls in varying lengths that mimic an operatic score. We are made to fall into a spell just as birthday guests and terrorists alike do under Roxanne Coss’s voice – and it is precisely the vocalist’s music that becomes the focus of the novel and for the characters. Outside distractions disappear and each character in the novel is forced to turn in and focus on the richness in front of them. They are drawn by a beautiful voice, but also by the unlikely relationships forged through this unexpected scenario.

So, like an opera, with sections of feeling lost and in love, of plodding along and being jolted in between, we the readers are finally slapped in the face as the final climax peaks. Like any good opera there is tragedy, and Patchett’s refusal to draw her novel to a close without a final tender note is refreshing. Bel Canto’s lead is music, and its rendition of brutality, love and humanity is gutsy and sobering.