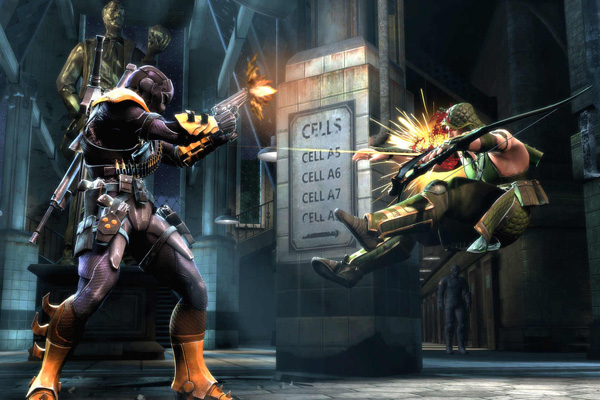 Injustice: Gods Among Us


Long before this game was announced, its questions were hotly debated. Who would win in a fight between Batman and Superman? Green Arrow and Green Lantern? Wonder Woman and Catwoman? Pimply nerds have argued these questions in comic book shops since the Fifties. Now they have a way to once and for all determine the answers to these most holy of questions.

Injustice: Gods Among Us is a classic fighting game, much like Tekken or Mortal Kombat. However, instead of fighting with Japanese martial arts clichés, you fight with the greatest heroes and villains from the wealth of DC comic book series. This idea was attempted in a crossover Mortal Kombat vs DC game in 2008, but most agreed that it was a weak attempt. Injustice finally gives the people what they want: the ability to run people over in the Batmobile.

NetherRealm studios, the studio behind Mortal Kombat, combined the brutality of the Mortal Kombat series with the narrative richness of the DC universe to create perhaps the first-ever fighting game with a not only comprehensible but also enjoyable story. This story has all of the staples of a good Justice League story arc, including dimension travelling, constant cameos, and painful one-liners. The story is completely original, written by both the team at NetherRealm and prominent DC writers. The story is handled primarily through cutscenes, but instead of detaching the player from the narrative it draws you in. Imagine watching a DC film and getting really into the story. Suddenly a fight is imminent, but instead of settling in to watch a brawl, you control the fight. The story mode has players fighting as all their favourite heroes, and even a few villains, as they seek to overthrow the tyrant – Superman! Intrigued yet?

The fighting itself is what you’d expect from a fighting game, but mixed in is an array of special moves that truly make you feel like you are a superhero. Each character has their own particular fighting style and set of moves. The special attacks are particularly epic – a good example of this is the Batman attack I mentioned earlier, that will see you strapping a tracking device to your enemy then doing a backflip over the Batmobile as it runs down your adversary.

The maps are another high point of the game. You get the opportunity to fight in a variety of DC locations, including the illustrious Atlantis and Batman’s own Gotham manor. The best part of these maps, apart from the countless cameos from unplayable characters, is the transitions. A staple of Mortal Kombat games is the ability to bash your enemy through a wall into a new area. Injustice has the most monumental transitions, as well as a variety of epic hidden locations in every map.

The story mode is only the beginning of the Injustice experience. The game has many alternate gameplay types, such as Star Labs – a challenge mode in which you need to complete various objectives in battles to achieve points. The game also includes your classic climbing-the-ladder fighting mode, in which you pick a character and fight your way through a series of enemies. Every time you finish a character’s ladder you unlock their story, just like Mortal Kombat’s ladder mode.

Some games deserved to be judged not on their artistic merit, but by how badass they are. Injustice is one of those games.
This article first appeared in Issue 9, 2013.
Posted 3:14pm Sunday 28th April 2013 by Baz Macdonald.