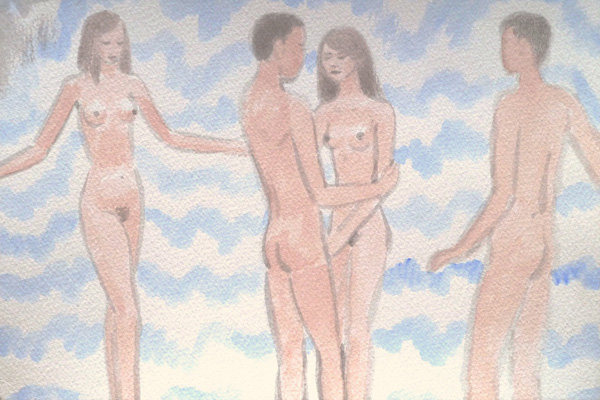 I always enjoy a visit to Michael Harrison shows. His symbolic imagery and soft watercolours are consistent, understated, intimate, and playful. Overall they're comfortable, yet it is this comfort that can very easily transform into boredom if care isn't taken.

It is pleasing to see Harrison developing as an artist in this exhibition. As a whole, the series feels more elated than usual. Although the animal images are similar to past work in their reminiscence of Len Lye's camera-less photographs, Harrison’s human figures have started to go beyond the “innocent, tortured boy desiring difficult girl” routine John Hurrell criticises him for. They're less unsettling, more... intimate. The desirous boy, well, he seems to get the girl these days.

One piece, entitled Taking That Final Step, features a young couple framed on either side by another girl and boy. They're all naked, of course. The central girl looks longingly down at the boy's crotch where her hands have disappeared, while the extra couple evokes Matisse's The Dance – their poses are fluid, and the palette isn't dissimilar. It's a moving and sensual piece.

Kushana Bush's Omens series was exhibited alongside Harrison's Venus in the Tenth House series at Ivan Anthony Gallery in Auckland last year, and I can't help but feel that Kushana may have had some influence on Taking That Final Step, among other work from the series. The more full-on sexuality displayed by the central couple and the sense of community lent by the extra youths is very much Bush's raison d'être. Harrison's work seems more liberated, and certainly brighter, than it was in that show last year.

The series’ main contrast with Bush’s work, aside from obvious stylistic differences, is its inherent heteronormativity. The title Invasion Biology, combined with his consistent animalist imagery, hints at the idea of acting on explicitly heterosexual animal instincts.

Yet this is where meaning gets muddy and conclusions are questioned, for the same set of factors supply Harrison’s own critique. His tried-and-true symbols of cats and birds add an intriguing commentary on humanity, nature, and conquest – New Zealand has a rich array of native birdlife, while cats are introduced. Formation, with its burial crosses, picket fences, birds, and mountain in the background, could easily be referencing the Colonial influence, or the effect of invasion biology, on Maori. The Christian burial crosses, specifically, contrast with the spiritual status of the mountain. The soft palette and “otherness” could even invite more comparisons with Matisse’s approach to such subject matter.

A strong point of Harrison's is his apparent simplicity and vagueness, leaving the viewer to do that staple of art viewing: make their own minds up. Overall, the images aren't too far from Harrison's usual serialisation – but they go somewhere interesting.