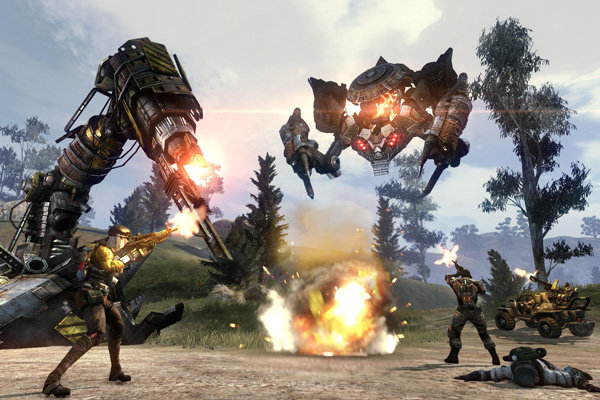 Developed and Published by Trion Worlds

Massively Multiplayer Role Playing Games (or MMORPG, games that are played entirely online with people from all over the world) are a tricky business. They require significantly more money to develop than a standard video game instalment due to the large scope of content as well as the ongoing costs of maintaini ng servers and creating new content and patches. This money is all gambled on a very fickle formula for success, which is that the game must allow for characters to play through a series of areas and quests which allow them to improve their characters. Once players reach the maximum level they expect content such as Player vs Player matches (PvP) and raids, which offer a seemingly infinite play experience. The formula allows developers to create a game that players will theoretically never stop paying for.

You may wonder why developers bother if it is such a gamble. They bother because Blizzard, developers of World of Warcraft, made $4 billion dollars in revenue last year – a tidy 10% of a 40 billion dollar industry. There is money to be made in MMORPGs, but only to those who offer lasting experiences. Many have tried to claim their slice of the pie, and almost all have failed. I fear that Trion Worlds’ new MMORPG, Defiance, will soon number as one of the fallen.

Defiance has intrigued me since its announcement last year. It wanted to claim its stake in the MMORPG market by doing something new. That something was that, in addition to the game, a TV series would be developed by SYFY in the same universe, and air at the time of the game’s launch. The developers boasted that this would allow a really rich narrative-heavy experience in both the game and the show, where events within the show would affect the game world and vice versa.

There’s no doubt that it’s an awesome idea. The trouble is that the game has almost no storyline. After spending a week with the game, I still can’t tell you a thing about it except that it is set in America after some aliens arrived. The rest is a mess of contradicting information – for example, the premise is an alien assimilation, but the only enemies I encountered in the first 20 hours of play were mutants and giant bugs. Where the fuck did they come from? No explanation, no elaboration, nothing. So my question is: what happened to the rich, narrative-heavy universe? The show doesn’t come out till next week in America, so not only are New Zealanders high and dry without resorting to illegal means, but are the developers really saying you NEED to watch the show to understand the game? Because that’s beyond retarded. The show and the game should complement each other, not be dependent on one another.

Still, if you can get past this unbelievable oversight, you can enjoy some incredibly derivative but fun third player shooting action. You can play with a variety of gun types, which you collect as loot, much like Borderlands. You can choose between the four incredibly plain powers of cloak, decoy, overpower, and melee. The more you play with a particular weapon type, the better you get with it. This, combined with a rating system which calculates the combined effectiveness of your loadout choices, is the game’s answer to levelling.

My advice is that if you feel like playing a third person shooter, pick up Gears of War. If you want to play an MMORPG, pick up Star Wars: The Old Republic or World of Warcraft. This game offers both experiences, but does neither well. I’ll watch the show when it airs next week with much interest. But even if it’s the best show in the world (doubt it) it won’t make this game any more enjoyable.