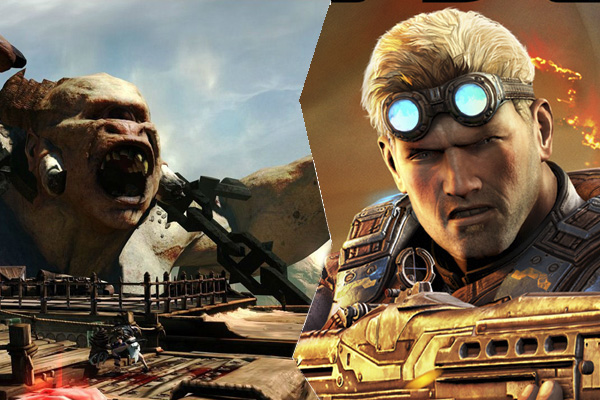 God of War vs Gears of War

Back in the days of Playstation vs. Nintendo N64, when choosing a console most people would pick the opposite console to what their friends had, so that you and your mates had access to all the games being released. Now, in the age of PS3 vs. Xbox 360, factors such as online gameplay have created a culture of buying the same console as your mates so that you can play online with them. So now the determining factor as to which console you buy is really determined by which first-party titles you want to play. First-party titles are games developed for only one console. This week the war of the first-party titles intensified with the release of God of War: Ascension for Playstation 3 (PS3) and Gears of War: Judgment for Xbox 360.

Coincidentally (or perhaps not) both games have the acronym GOW with a subtitle, both games are prequels, and both came out in the same week. Both God of War and Gears of War were originally slated as trilogies, both of which concluded two years ago. However, both series were huge moneymakers for the companies and so prequels were the best way to keep flogging that cash cow.

God of War: Ascension has players playing once again as their favourite god-killer Kratos, though the game is set before his god-killing days had begun. The first two God of War releases showed us glimpses of how Kratos became the general of Ares, the Greek god of war, how he came to have his skin covered with the ash of his fallen enemies, and the death of his wife and daughter. This information and other glimpses of his past in the PSP spinoffs gave us a pretty clear picture of Kratos’s past, making many fans skeptical of the story that a prequel would tell – a skepticism not entirely without cause.

The creators of Kratos’s latest escapade have had to delve deep into Greek mythology to pull together a tale. Turns out that before the gods of Olympus, before even the Titans, the universe was created by the Primordials. Ascension has Kratos facing off against the Primordials’ guardians, the Furies, who seek to punish Kratos for breaking his word to the gods. To be honest, the story is pretty haphazard. The God of War trilogy had an equally lacklustre narrative but, unlike Ascension, it also had the central driving goal of killing the gods. Ascension lacks the resolve that kept Kratos fighting in the trilogy, and because of this the whole thing seems fairly pointless.

Despite this, the game is still full of all the staples fans have come to expect from the series. Combat is still challenging, with Kratos facing off against a variety of different mythological creatures and finishing them off in truly grotesque fashion. This is intermingled with areas of problem-solving and exploration. Kratos is introduced to new weapons and magic as he progresses and can level up with the typical red orbs.

The game has exceptional graphics and brings the tone and look of God of War to life more than ever before. The set pieces for which God of War is famous are as well choreographed as ever, and Kratos squares off against some truly horrifying bosses.

I have no problem with sequels, prequels, reboots and every other attempt at prolonging a franchise’s profitability – so long as each instalment progresses. This is something God of War has always failed to do. Every game since God of War 1 has offered the exact same experience with very small differences. Ascension exacerbates the problem, because without an interesting premise the repetition is painfully apparent.

Gears of War: Judgment seeks to use its status away from the core series to offer gamers a refreshing new narrative experience. Developers in the gaming industry are always tentative to make drastic changes to core games in a series due to gamers’ occasionally massive backlashes. However, spinoffs can inspire developers to explode their innovation all over it, and make a product better than or at least equal to the core series. Examples of this are games like Killzone: Liberation for the PSP, Halo 3: ODST and now Gears of War: Judgment.

With this prequel, People Can Fly made the very wise choice to mix up the narrative style. The story is set before the events of Gears of War 1 and sees familiar characters Baird and Cole (a.k.a. the Coletrain) in action once again. The story begins with the four protagonists being dragged in chains by COG agents toward their trial. A huge pillar of smoke can be seen in the background and cheeky glances by Baird indicate that they are somehow responsible for this destruction. The story has the four characters recounting the events leading up to their trial. With each retelling, the player fights as the character currently recounting events. This gives the game multiple perspectives as well as giving the player multiple playing styles. The story is superbly written, truly interesting, and always exciting.

The gameplay has players once again storming through the battlefield in search of cover while firing wildly at raging locusts (an alien species, not the insect). There are few new weapons, but the gunplay does feel a lot more polished than in any other GOW title. The enemies are a similar story but the AI is responsive and at times overwhelmingly intelligent. People Can Fly has also added a “declassified” gameplay option. This allows players to choose whether the narrator divulges certain information about the mission – this makes the mission more difficult, but allows players to achieve higher scores.

I would hate to add fuel to the fiery war between Microsoft and Sony, but releasing these two games in the same week begs comparison, and so I must say that Gears of War: Judgment is the clear winner. God of War is a celebrated series and in the past I have thoroughly enjoyed the games’ gratuitous violence and mildly informed stories, but if the gaming industry is going to drain a franchise of every last dime they need to be innovative. Developers need to understand that although we love the worlds they create and will gladly exchange our money to experience them again and again, we also expect them to make these entries change and evolve, much as we would a TV show (hear that, How I Met Your Mother?) So well done Microsoft, you’ve won the First Party title belt. But this was just one battle in a never-ending war; I’m sure that the two companies will go head-to-head again soon, and who knows who will be the victor then?
This article first appeared in Issue 5, 2013.
Posted 6:30pm Sunday 24th March 2013 by Baz Macdonald.