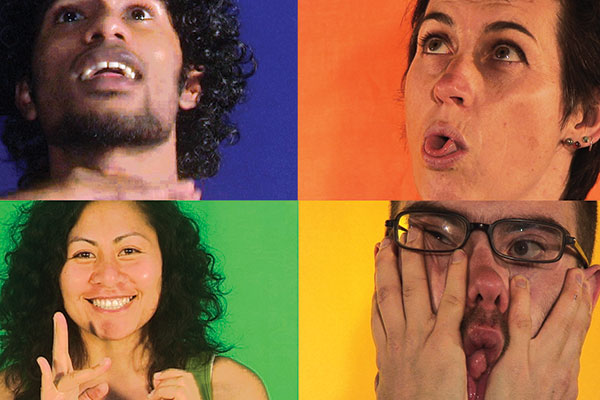 The first thing I heard upon entering this exhibition was “This is freaky!” (uttered by a young girl of about five or so, who was there with her mother). The second thing, which immediately followed the first, was “What the fuck is this?” (which earned the teenage speaker a dirty glare from the mother). Suffice to say I was more than a little intrigued, and perhaps a touch concerned – feelings which were immediately justified when I discovered what awaited me in Bodytok Quintet.

The name of the exhibition alone puzzled me. I wasn’t sure what to expect, although I did know that it comprised five interactive screens, so at least the “quintet” part made sense. “Bodytok”, though, required some kind of context, and everything fell into place when I walked into the dark Museum space. The exhibition features bodies. And noises.

Basically, what happens is this: each screen features a clip of a person, generally a close-up of their face, which moves in slow motion as you watch from a distance. Approach the screen, however, and the screen activates. The clip begins playing at normal speed, and depicts people doing some pretty odd shit. One unruly-haired man started making peculiar clicking noises with his mouth; another with ginger locks moved his arm vigorously up and down, resulting in a squeaky fart-like noise; yet another brunette woman opened her mouth wider and wider and emitted the most terrifying half-squawk, half-scream I have ever heard. Reactions to these spectacles varied. Some, like the aforementioned young girl, were both curious and excited. Others, like the potty-mouthed teenager, were clearly repelled and confused. As for me, I jumped back in shock at one, burst into undignified giggles at another, and just stared, vaguely creeped out, at the woman who smiled slyly while producing a peculiar whistling noise. As I meandered from screen to screen, I couldn’t help but wonder: why were my reactions so extreme? Why did my emotions veer from cramp-inducing laughter to complete and utter terror within 30 seconds?

The exhibition explores, as you’ve probably guessed, the human body, and the often unexplored capabilities we have for making sound. “The human body is the first instrument”, boldly proclaimed the wall of text that accompanied the exhibition, and the range of complex gurgles and snorts and squeaks that echoed across the space made it evident why. We are so accustomed to communicating through coherent speech that there’s a primal intensity present in the sounds we make that tend to fly under the radar. Bodytok Quintet prompts viewers to view their musical capabilities in a whole new light and emphasises the way in which rhythm is an inherent part of human nature.

The special dynamic that exists between the viewer and the artworks highlights this particularly well. The onscreen performer becomes a unique artist, wielding an instrument that belongs solely to them in an intensely personal manner that deeply engages the viewer. Whether you, like me, find the idea refreshing and innovative, or think it’s simply too peculiar for your tastes, pop along to the Museum. At the very least, it’ll give you a laugh. Or make you scream. Either way, it’s all very interesting.
This article first appeared in Issue 22, 2012.
Posted 5:17pm Sunday 2nd September 2012 by Beaurey Chan.