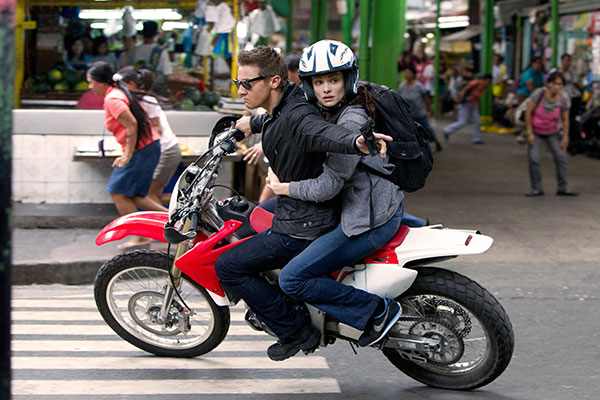 Should I even be comparing this to the first three Bourne films? It has no Matt Damon, a completely different supporting cast, and a new director (although Tony Gilroy was screenwriter for the original trilogy). The plot has nothing to do with the search for identity which animated the first three. Instead it’s something about genes and viruses and pills, and follows Aaron Cross, another CIA hitman from Bourne’s... peer group?

But yes, of course I should. Because it may be a Bourne film in name only, but that’s the point – they used the name to sell tickets, knowing full well that the name would demand a certain pedigree. All the more so because, for better or worse, the Bourne films changed action cinema: nowadays, explosions are passé, action sequences need to have a point, and heroes are required to be dark and haunted. Just look at James Bond and Batman.

While Gilroy does his best to ape previous director Paul Greengrass’ style, the overall effect was slightly disorienting: the same, but different. Definitely worse, but for reasons I couldn’t quite pinpoint. I’ve since realised that it’s a number of small things. I’m aware that this realisation isn’t particularly original, but then again, neither is the film. The lead (Jeremy Renner) is just less compelling than Damon, and Cross’ story less primal, more science-geeky and isolated. Connecting with Cross was also harder: because Jason Bourne had amnesia, the audience knew just as much as him and no less; it was clear what he wanted and why. By contrast, during Legacy I often felt left behind. Large sections feature Renner simply motoring robotically along, his motivations totally opaque.

There are also some quite obvious problems – the CIA subplot didn’t really go anywhere; the “master versus student” trope was shoehorned in to absolutely no effect; and the climactic action sequence is basically recycled from The Bourne Ultimatum. The film also ends rather abruptly, like this review.